Timiebi Aganaba is a CIGI senior fellow and holds several positions, including assistant professor of space and society in the School for the Future of Innovation in Society, at Arizona State University. 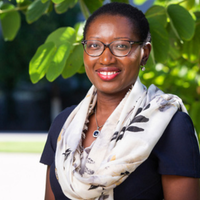 Timiebi is a CIGI senior fellow, an assistant professor of space and society in the School for the Future of Innovation in Society, an affiliate faculty member with the Interplanetary Initiative and a senior global futures scientist with the Global Futures Laboratory, and holds a courtesy appointment at the Sandra Day O’Connor College of Law, all at Arizona State University. She was previously a post-doctoral fellow at CIGI, where she focused on environmental and space governance.

Timiebi was executive director of the World Space Week Association, coordinating the global response to the UN 1999 declaration that World Space Week should be celebrated October 4–10 annually. She is currently on the advisory board for the Space Generation Advisory Council, supporting the United Nations Programme on Space Applications. She is also on the science advisory board of World View Enterprises and the SETI Institute.

Other positions include four years as a space industry consultant for the leading space analyst firm in Montreal, Canada, where Timiebi led a series of commercialization studies for the Canadian Space Agency and led the social aspects of a socioeconomic assessment of the Canadian space sector.

She was also a teaching associate (France, 2008) and associate chair (Ireland, 2017) of the Space Policy, Law and Economics Department at the International Space University, and an associate at Kayode Sofola & Associates law firm. She served on the National Youth Service Corps at the Nigerian National Space Research and Development Agency, where she spent a year in the legal affairs and international cooperation department.

Timiebi represented Nigeria at the United Nations as a Next Generation of Aviation Professional at the International Civil Aviation Organization Model Council in Montreal (2014) and at the Legal Subcommittee of the Committee on the Peaceful Uses of Outer Space in Vienna (2011). In 2017, Timiebi was the recipient of a Space Leaders Award from the International Astronautical Federation, and her doctorate received the George and Ann Robinson Award for advanced research capabilities.

An avid and passionate communicator, Timiebi has been featured in the Washington Post, The New York Times, CNN, NPR, LA Times, The Telegraph and Business Insider, among others. She hosted and produced the 12-episode Ladies Do Launch podcast and has acted as an international moderator for high-level events such as the Dubai Expo 2020.