Central Bank Communication after the Crisis: Has Anything Changed?

The story is now well known. As central banks around the world began to converge on similar monetary policy strategies there was little thought given to the possibility that the twin goals of price stability and financial stability would come into conflict with each other. The global financial crisis (GFC) of 2008-2009 changed attitudes and reminded policy makers that it is not straightforward to manage macro- and microprudential concerns simultaneously (see Barwell 2013 and references therein).

Central bank governors began to underscore the importance of communication even before the GFC, but this event complicated central bank communication in several respects. One reason is that inflation control has, for the time being, taken a back seat to financial system stability; however, the concept of financial stability is not well understood (Goodhart and Tsomocos 2010). Perhaps more importantly, complex problems cannot be treated with a single instrument. It is more challenging to convey to a public disappointed by the size and scope of recent crises that the difficulties of communicating financial system stability are magnified, compared to explaining the concept of price stability (see Born, Ehrmann and Fratzscher 2011).

There are also the attendant risks of a loss of central bank credibility and reputation. Since some central banks face the prospect of withdrawing their quantitative easing policies, they also have to explain why policy rate rises will have to wait until the financial and economic systems are sufficiently healthy to support a return to normal monetary conditions. The so-called “taper tantrum” of mid-2013 is one example of many where a central bank, in this instance the US Federal Reserve, faced unexpected and adverse reactions to a prospective change in the policy stance (Neeley 2014). Of course, some attempts at public communication have been very successful. The European Central Bank (ECB) president’s 2012 remark that “within [its] mandate, the ECB is ready to do whatever it takes to preserve the euro. And believe me, it will be enough” is an example that words can be more important than deeds (Draghi 2012).

Table 1 below provides some data about central bank transparency for the economies covered by a separate survey prepared by me and BIS staff and analyzed below. The transparency index aggregates 15 attributes that are sub-divided into five broad categories. The data confirm that there are subtle but important differences between IT and non-IT economies. Table 1 also highlights the fact that non-IT central banks in the data score above average values when compared to the complete data set consisting of 105 economies. Even if overall transparency is a useful indicator, this metric disguises the sources of this transparency, which may be more relevant for the study of central bank communication during crises and the implementation of unconventional monetary policies. 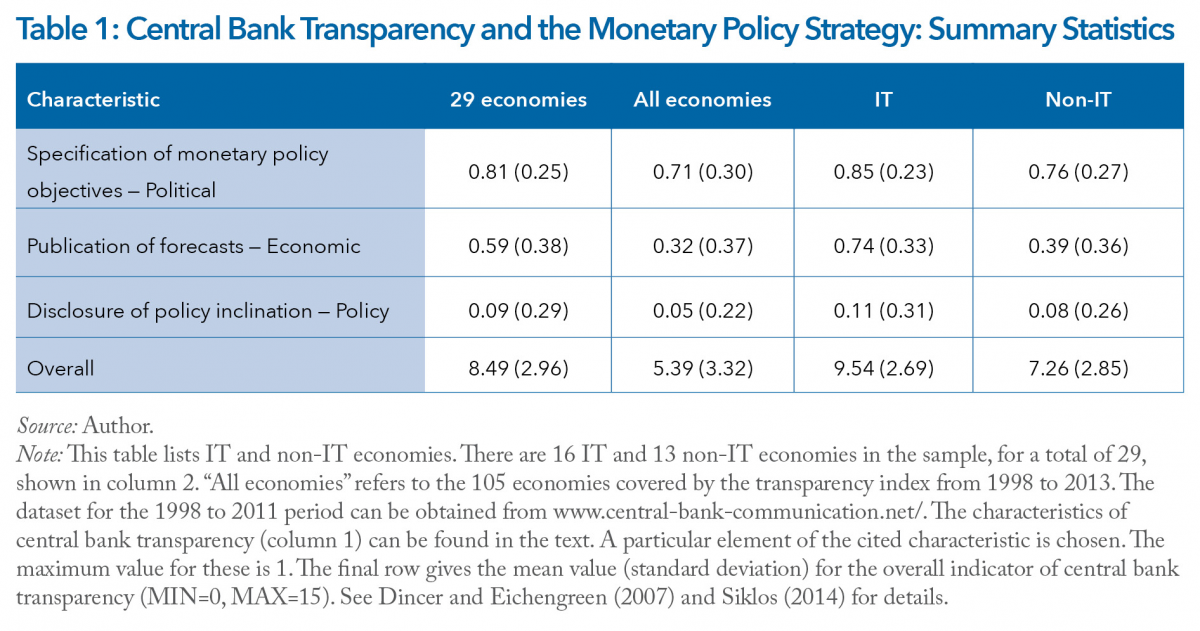 Since measures of central bank transparency are insufficient, a survey — “On Monetary Policy Communications After the Crisis: What Has Changed and Why?” — was conducted with staff at the BIS. It was designed in 2012 and carried out among 39 central banks between May and July 2013. A few central banks requested that they not be identified, or chose to complete only portions of the survey.

The survey consists of five parts. Part A focuses on how central banks see their role differently from a previous BIS survey in 2007 (Jeanneau 2009). This includes asking about changes in central banking operations along the monetary policy and financial stability dimensions. Part B examines various elements of central bank communication, including the various tools used by central banks to communicate, as well as how frequently the monetary authorities communicate with the public. Part C focuses on specific details of a central bank’s communication strategy. I was interested, for example, not only in whether central banks publish macroeconomic forecasts, but also about the assumptions and the role of judgment in producing these forecasts and how these are explained to the public. Questions were also posed about attitudes and the potential roles of forward guidance and unconventional monetary policies. I was also interested in whether the GFC changed attitudes toward the role of monetary policy surprises versus placing a greater weight on predictability when implementing monetary policy.

Parts D and E complete the survey by examining the role and functions of macroprudential policies. Central banks were asked to answer several questions about changes in communications policies since 2007 and the reasons for any changes. The survey sought to find out what types of reports might have been published in relation to macroprudential measures and whether other decision-making bodies would be involved, as well as asking for examples of specific measures introduced. Regarding changes in central bank communication, the survey also enquired about whether the material that had to be conveyed to the public has become more complex over time.

Given the wide-ranging nature of the survey, it is impractical to discuss each one of its questions. This commentary focuses on a single question: central banks’ views about the predictability of monetary policy actions (see Figure 1 for the survey’s findings). In every case, the focus is on the interpretation of policy rate changes implemented by the monetary authorities surveyed. The height of the bars indicates the degree to which importance is attached to the two types of changes in monetary policy. 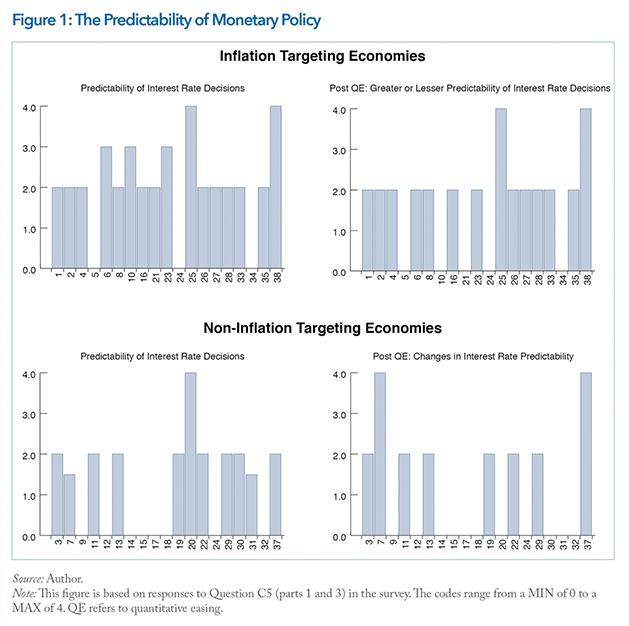 How do these developments impact macroeconomic performance? One finding is especially notable. The degree of responsibility over monetary policy is significantly related to inflation performance, while communication about financial system stability influences both inflation and changes in policy rates. It should be noted that the estimates establish only a statistical relationship. Causal inferences cannot be drawn from the data.

Mark Carney (2009), former Bank of Canada governor and currently governor of the Bank of England, suggested that “an effective communications strategy for normal states may prove counterproductive in exuberant states.” Assuming that the survey results are representative of the attitudes in major central banks, we have yet to clear evidence about how they have taken this lesson to heart.

An intriguing question remains: had there not been a GFC, would central banks communicate differently? It is not straightforward to deal with this counterfactually. While the surveyed banks have developed macroprudential tools to deal with future risks of financial instability, in other areas (for example, dealing with monetary policy surprises), central banks have given some indications that they are more wary about communicating transparently, or, rather, that central banking is best delivered with some opacity. In this sense, it is not the crisis per se that has changed the communications strategy of central banks, but the way to exit from the extraordinary conditions several find themselves in post-crisis.

Therefore, going forward, central bank communication will have to focus on the risks of moving too quickly back to normal policy stance, but also clearly communicate how the banks’ role cannot be easily separated from that of other partners in policy making, including supervisors, regulators and treasuries. In particular, central banks have to be more vocal, not about the limitations of monetary policy, but that exit from extraordinary conditions is a joint effort. This means that while the monetary authorities must preserve their hard-won autonomy from political interference, a return to pre-crisis-like policy conditions cannot succeed without more cooperation, if not coordination, with the other institutions responsible for delivering stable economic and financial conditions.

Carney, M. 2009. “Some Considerations on Using Monetary Policy to Stabilize Economic Activity.” Remarks given at the Jackson Hole Symposium sponsored by the Federal Reserve Bank of Kansas City. www.bankofcanada.ca/wp-content/uploads/2010/03/sp220809.pdf.

Jeanneau, S. 2009. “Communication of Monetary Policy Decisions by Central Banks: What is Revealed and Why.” BIS Papers No. 47. May.

Going forward, central bank communication will have to focus on the risks of moving too quickly back to normal policy stance, but also clearly communicate how the banks’ role cannot be easily separated from that of other partners in policy making.