Two con artist tailors sell the Emperor clothes made from a cloth that appears invisible to any man unfit for his office or unpardonably stupid. "The Emperor’s New Clothes" is a fairy tale — a metaphor for collective denial, where we willingly ignore an obvious fact, despite individually recognizing its absurdity. It is a story where people willfully believe what they know is not true. Only a person too naïve to understand the group pressure to deny the clear evidence would dare to say, “The Emperor has no clothes!”

Climate change financing is a case in point of the same collective denial mentality. An international treaty is in place — the United Nations Framework Convention on Climate Change (UNFCCC), negotiated 21 years ago.  The treaty provided for developed countries to take the lead in emission reduction — as it was developed countries that caused the problem. Developing countries maintain that the Convention recognized equity as its paramount principle. As Martin Khor stated in a presentation at the UNFCCC: “Developing countries have development imperatives, and their ability to undertake climate actions depend on the extent of support they receive from the developed countries."[1] Despite all evidence to the contrary, developing countries, quoting Article 4.3 of the Convention,[2] continue to expect rich countries to provide financing and technology to meet the full incremental costs to deal with and adapt to climate change.

Since December 2009, when Hillary Clinton announced the goal of the public and private sectors of developed countries jointly mobilizing $100 billion a year[3] by 2020, the presumption has been to treat her statement as a pledge. International organizations, non-governmental organizations and academics all characterize the goal as a firm commitment. As of yet, there is no one definition of “climate finance” agreed upon and no centralized system for tracking all relevant climate flows.[4] The obvious fact, ignored by everyone, is that developed countries will not provide the necessary funding. Clinton’s feebly-worded statement at Copenhagen (“funds to come from a variety of sources”)[5] has been universally misinterpreted as a firm commitment. Subsequent Group of Twenty (G20) iterations helped to solidify the mistaken inference.[6] Whenever anyone questions the presumption, developing countries’ representatives, led by India, rise up in righteous anger and pillory the skeptic.

Innovative approaches to raising money have been studied for years. France, host country of the Permanent Secretariat for the Leading Group on Innovative Financing for Development, has promoted the idea of introducing an international financial transaction tax (FTT) and an instrument to levy taxes in the aviation and maritime transport sectors, with a proportion of the tax to be allocated for development. (If this initiative should ever get off the ground, climate change claimants will have to compete with health sector proponents for the putative revenues). 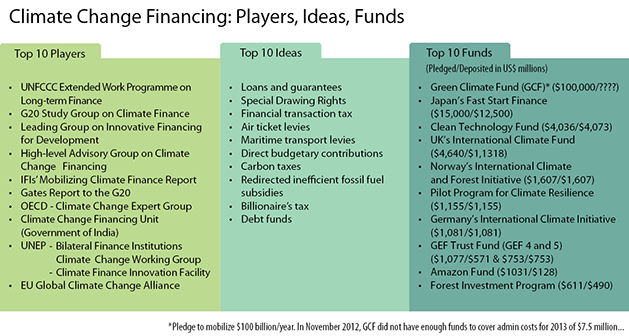 For the last 20 years, there has been meeting after meeting with ever more elegant diplomatic euphemisms promising progress, when the deadlock is permanent. In 2010, the UN Secretary-General’s High-level Advisory Group on Climate Change Financing published an objective analysis of the different financing sources that could be used to raise the $100 billion per year by 2020.[7] The report claims that the goal can be achieved with the introduction of a carbon price of $20 to $25 per ton in 2020, plus a tax in both the maritime and aviation sectors, as well as currency taxes and FTTs. This report did not enumerate the political difficulties of implementing these international taxes.

In 2011, the French Presidency of the G20 requested a report from a combination of international organizations and regional development banks on financing climate change adaptation. In addition to canvassing the usual suspects — carbon taxes, the FTT, levies on the air and maritime sectors, and green climate bonds — the group’s report, Mobilizing Climate Finance, presented at the Cannes G20 Summit, also highlighted the possibility of redirecting inefficient fossil fuel subsidies (first promised at the Pittsburgh G20 Summit). Again, this report did not analyze the political constraints. The Gates Foundation report[8] on financing for development, covering the same ground, was “welcomed” by the G20. “Welcome” is a polite euphemism used liberally by the G20 to indicate no action is being taken. A year later, in Los Cabos, the G20 mandated a Study Group on Climate Finance co-chaired by France and South Africa. The Study Group has deteriorated to an ineffectual forum to share best practices.

The UNFCCC has a work program on long-term finance that can be fairly characterized as a navel contemplation exercise — studying “sources, needs and lessons learnt from fast-start finance” and continually refining the program of work.[9] Recent history is no different. The UNFCCC website touts this month’s meeting as “concrete progress towards a new universal climate change agreement and on creating solutions to increase existing global action to deal with climate change.”[10] This is not appreciably different from the milquetoast communiqué of the April G20 Meeting of Finance Ministers, where they “underscore the importance of long term finance for investment” and promise to consider the recommendations (if any) from the G20 Study Group.[11]

Given the crippling fiscal constraints of developed countries, why believe in illusory altruism? Instead, international negotiation efforts should be focussed on initiatives where there is a chance of agreement. Cooperation on future standards for power plants, buildings, vehicles and appliances, and collaborative research projects on renewables and carbon capture come to mind. One would think that sooner or later, even if no child exclaims that the Emperor has no clothes, the Emperor himself would notice the chill. But perhaps not; not with global warming.

[2] “The developed country Parties and other developed Parties included in Annex II shall provide new and additional financial resources to meet the agreed full costs incurred by developing country Parties in complying with their obligations under Article 12, paragraph 1. They shall also provide such financial resources, including for the transfer of technology, needed by the developing country Parties to meet the agreed full incremental costs of implementing measures that are covered by paragraph 1 of this Article and that are agreed between a developing country Party and the international entity or entities referred to in Article 11, in accordance with that Article. The implementation of these commitments shall take into account the need for adequacy and predictability in the flow of funds and the importance of appropriate burden sharing among the developed country Parties.” Available at: http://unfccc.int/essential_background/convention/background/items/1362.php.

[3] Serious estimates of the sums needed are much larger than $100 billion per year. See http://unfccc.int/files/cooperation_support/financial_mechanism/long-term_finance/application/pdf/montes_9_july_2012.pdf.

[6] "We reaffirm that climate finance will come from a wide variety of sources, public and private, bilateral and multilateral, including innovative sources of finance." G20 Leaders (2011), Cannes Summit Final Declaration.

[7] The report is available at: www.un.org/wcm/webdav/site/climatechange/shared/Documents/AGF_reports/AGF Report.pdf.

[9] See the December 2012 Conference of the Parties Decision 4/CP.18, “Work Programme on Long-term Finance in 2013,” available at: http://unfccc.int/files/cooperation_support/financial_mechanism/long-term_finance/application/pdf/ltfii_slides__information_event,_3_may.pdf.

The obvious fact, ignored by everyone, is that developed countries will not provide the necessary funding.