Why Do Poor Children Perform So Poorly?

Substantial differences in math and reading skills by parental income are already evident by the time children enter school, and persist throughout childhood into adolescence (Carneiro and Heckman 2002; Cunha et al. 2006). Studies also show that income-based differences in adolescent achievement go a long way toward explaining later differences in educational attainment and lifetime earnings (Keane and Wolpin 1997; Carneiro and Heckman 2002). Together, these findings suggest that a generation’s fate may be largely sealed by the time they enter school. If this is true, an understanding of intergenerational mobility and its implications for economic and social policy requires an answer to the vexing question: why do poor children perform so poorly?

Income-based achievement gaps are accompanied and, at least partially, caused by substantial differences in the extent to which rich and poor parents invest in their children, as shown in Figures 1 and 2. For example, mothers of very young children from the highest income quartile are more than twice as likely to have 10 or more books in the home, and over 50 percent are more likely to read to their child three or more times per week, compared to mothers from the lowest income quartile. Children from six to seven years old from high-income families are more than twice as likely to be enrolled in special lessons or extracurricular activities, compared to their lower-income counterparts. 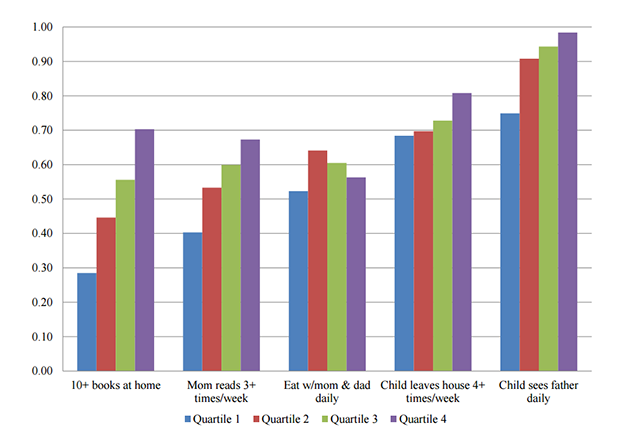 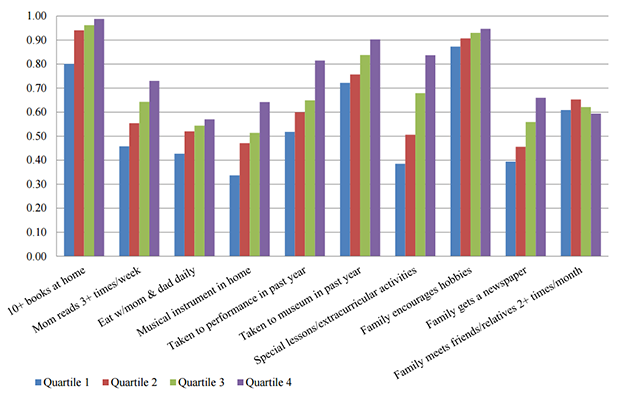 Why do rich and poor parents invest so differently in their children?

This suggests one reason why children from higher income families receive greater investment and perform better academically: the natural ability of children and parents may be positively correlated (intergenerational ability correlation). Higher-ability parents tend to earn more and have more able children, leading to a positive correlation between parental income and child investment and achievement. The fact that investment and achievement gaps by parental income shrink considerably when differences in maternal ability and education are taken into account suggests that this is likely an important part of the story. However, given that significant achievement and investment gaps remain even after accounting for these maternal characteristics would suggest that other factors are also relevant.

While all of these mechanisms might explain why richer parents invest more in their children than poorer parents, it is important to understand the mechanisms that actually do, because they have very different policy implications. If investment gaps result only from a strong intergenerational ability correlation and/or the fact that parents enjoy investing in their children, policies designed to reduce those differences may be equitable, but are likely to be inefficient (i.e., reduce gross national product). By contrast, if low-income families are poorly informed or constrained in their capacity to borrow, then they may make inefficient, low investments in their children. In this case, well-designed policies can improve both equity and efficiency.

In the paper “Correlation, Consumption, Confusion, or Constraints: Why Do Poor Children Perform So Poorly?” (2015), we examine the extent to which these explanations are consistent with other important empirical findings in the child development literature:

We show that to explain the high returns to additional investment among the poor (Fact 1), information or credit market failures are needed. Absent these market frictions, families will invest until the returns are driven down to or below the returns on savings. The timing of income is only important (Fact 4) if some parents are constrained in their borrowing; otherwise, families can always use borrowing and saving to spend money when they want, regardless of when it is received. If parents with young children are poorly informed about the value of child investments and/or face limited borrowing opportunities, then policies designed to alleviate these market failures can improve efficiency while also improving the economic outcomes for those that are most disadvantaged. What might these policies look like?

Governments can step in to directly provide credit for early child investments (for example, New York City’s recently piloted Middle Class Child Care Loan Initiative) like they do for college students. Subsidized preschool for low-income children can also help address borrowing problems. Programs that help inform low-income parents about the value of talking and reading to their young children or the benefits of attending a quality preschool are steps toward confronting information problems. Together, these common-sense policies can help ensure that economically disadvantaged children face the same potential for lifetime success as their better-off peers.

In addition to the research discussed here, as part of our CIGI-INET grant, “Lifecycle Human Capital Investment, Borrowing Constraints and Risk,” we further study the importance of credit limitations for child development and appropriate policy responses.