Extremist views are justified through a variety of conspiracy theories and pseudo-legal arguments, many of which are propagated online.

Democracies are, and should be, loud: protest and demonstration are an essential part of free speech and public engagement. That such protests are noisy, cause inconvenience, and disrupt politicians is a normal part of the cut and thrust of politics.

Yet the events and actions seen around the world in recent months represent something very different. While seemingly embracing the noise and disruption of democratic protest, some groups and individuals are increasingly combining demonstration with the underlying threat or use of brute force to promote change. Essentially, many populist groups have given up on convincing their opponents and have resorted to compelling them, through the threat of physical violence to health-care workers, journalists (in particular, women journalists of colour), politicians and even law enforcement.

What is driving this behaviour? There is no one explanation. But we can point to several different motivations directing individuals to embrace the use or threat of violence. For example, some actors appear to profess “sovereign citizen” beliefs, whereby individuals come to believe they are not under the jurisdiction of any government and are exempt from the laws of the place in which they live. These views are justified through a variety of conspiracy theories and pseudo-legal arguments, many of which are propagated online.

When “sovereign” adherents believe (almost always erroneously) that their rights are being infringed upon, they have been known to act violently. The growth in sovereign citizen–inspired beliefs can partially be traced to the QAnon movement. These beliefs also appear to have grown in relation to the anti-mask and anti-lockdown protests. Groups using sovereign-citizen ideas have been behind recent campaigns in Canada to arrest the prime minister and police officers.

A second line of motivation comes from far-right ideologically motivated violent extremists who believe that the actions of government, particularly in relation to COVID-19 public health measures, constitute a personal attack on their freedoms. In some cases, these ideas are linked to online conspiracy theories centred on “the Great Reset,” fuelled by the fear that a shadowy cabal of “globalist” world leaders are seeking to undermine the sovereignty of states and fundamentally destroy their way of life. This notion can sometimes be linked to the false and pernicious “Great Replacement” conspiracy, which shares the idea of an all-controlling global body of elites, and asserts that its end goal is to replace whites with non-whites — an idea that has inspired many far-right actors and movements, including a mass murderer in Buffalo, New York, in May 2022.

A third motivation comes from those who simply may find it easier to express rage than to articulate policy ideas. It is likely these populist protest movements feel more enjoyable than “politics as usual.” Blaring a truck horn in the middle of the night is arguably more fun than learning the ins and outs of an opaque policy process. And some may prefer the perverse catharsis of seeing politicians feeling threatened for their perceived crimes, over advocating their own solutions.

This raises a paradox: although rage may be the motivator for this movement, what drives it may be its social elements. Individuals with unconventional beliefs not shared by their immediate family, friends or colleagues are able to find one another online, assisted through algorithms that privilege incendiary content. But here the underlying rage of the movement polarizes it toward more zealous ends, helping to justify more extreme actions over time.

Again, while more explanations exist, what unites these three motivators is that they are embraced by individuals who have, for whatever reason, lost faith in the political process. Feeling unheard, they seek to force their views on what is seen as a traitorous political class.

Unfortunately, rather than trying to re-engage with these individuals, some politicians increasingly seek to tap into the anger for short-term political gain. Whether it is Canadian members of Parliament joining figures from the so-called “freedom convoy” during the truckers’ occupation, or US Senator Lindsey Graham ominously warning about violence in the streets should charges be brought against former President Donald Trump, politicians have lately provided legitimacy to populist movements that embrace physical intimidation over political discourse. These movements are well networked, have a demonstrated capacity to raise money, and, most importantly, have energy and are highly motivated: it’s a catnip-like combination for any politician.

Given the complex nature of the problem, there is no easy solution. While some events, such as the January 6, 2021, Capitol riots in Washington, DC, and the January 2022 Ottawa “freedom convoy” occupation, were planned, the actions of individuals in these movements are often random and opportunistic, making prevention and disruption difficult. Providing security to politicians and public figures may help, but at significant cost that does not address the root cause of the violence. Further, the more layers of security we provide politicians, the less accessible they may seem to be, which could exacerbate the problem.

Finding a remedy must begin with law enforcement and social media platforms taking the issue of harassment and threats more seriously — something they have so far proven reluctant to do. But most importantly, it will require political parties in Western states to step back from endorsing movements that embrace physical intimidation over the norms on which our democracies rest. 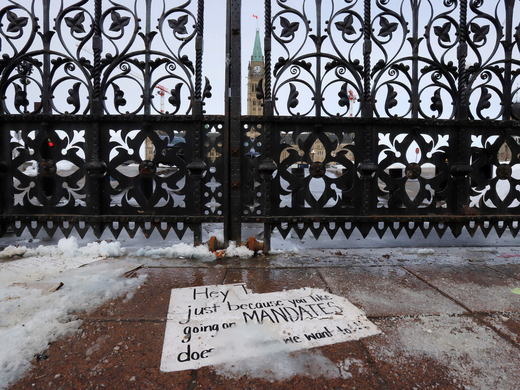 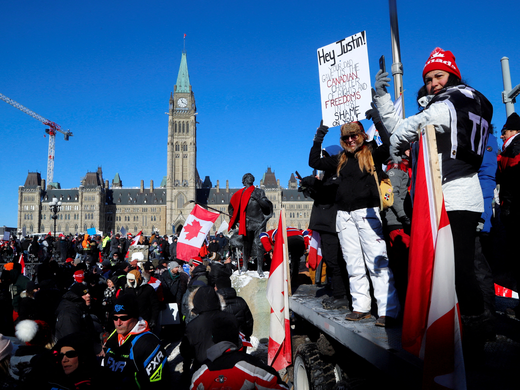