Whether in India, China or Vietnam, digital communication has provided new fora for narratives of all kinds, including authoritarian messages.

Globalization, supranational institutions, regional economies, climate change, international jihad, migration and the current pandemic; despite expectations, these transnational phenomena have not weakened the notion of nations and nationalism.

On the contrary, there is an increasing trend to deglobalization in a drive to reaffirm state sovereignty. Xenophobic discourses have grown during the COVID-19 pandemic and, previously, following large-scale terrorist attacks in the West. We do not live in a world without borders or attachment to nations.

This has a bearing on the digital revolution. The World Wide Web, as its name implies, connects people from around the globe, creating new networks and encounters with different communities and cultures. Yet, the internet and social media have provided platforms for new expressions of nationalism, including xenophobic, anti-elite and protectionist discourses. Social media has been blamed for encouraging the kind of exclusionary nationalist sentiments that led to Brexit, the ascendance of Donald Trump and Jair Bolsonaro, and genocide in Myanmar.

And the rapidly emerging reality is that information communication technologies are transforming nationalism. Indeed, from Google to Facebook and Weibo, the multitude and affordability of these platforms have enabled wider participation in all manner of discourse. Even in authoritarian or semi-authoritarian regimes where internet censorship exists, social media can provide new channels for political expression, identity making and community building.

Moreover, a connected militant diaspora can now directly contribute to nationalist sentiments or to what Daniel Conversi refers to as “long-distance nationalism,” where members of “virtual communities” can form a national consciousness without even meeting face-to-face.

State leaders and diplomats now have new fora in which to “brand the nation,” disseminate nationalist messages and strengthen the image and legitimacy of the regime. At the same time, the diversity of users also means a diversity of perspectives. Governments no longer have a monopoly on nationalism. The interplay between various networked actors is intricate and can create narratives about the nation that are sometimes beyond the control of the state. This dynamic makes digital nationalism complex, ever-changing, and marred with potential pitfalls.

In considering the phenomenon, it’s worth looking at South Asia and Southeast Asia, where geopolitical contexts, political structures and social media uses vary. For big powers such as India and China, as well as for smaller countries such as Vietnam, digital nationalism can take several forms, alter the nature of nationalism and even influence offline events.

As the world’s largest democracy, India stands out as a case of a disrupting encounter between digital media and nationalist politics and politicians, to the point that some wonder whether India can still be considered a democracy. Ahead of the 2014 elections, Twitter approached political candidates with the aim of getting more Indians on the platform — a lucrative prospect for the company.

Then-candidate Narendra Modi, who proved most adept at using social media to spread his political message, won the elections and announced it on Twitter first. Soon after his election, Modi’s nationalist Bharatiya Janata Party (BJP) began using Twitter and other platforms such as WhatsApp to boost Hindu nationalism and manipulate public opinion, including through the use of “cyber troops.” Even before Modi’s election in 2014, so-called “Internet Hindus,” largely seen as siding with him, were spreading right-wing Hindu nationalist tropes and anti-Muslim narratives.

A large number of pages on Facebook exist to mobilize support for the BJP and boost nationalist Hindu sentiment. These narratives have accelerated under Modi, sometimes with lethal consequences. Indeed, in 2018, several mob lynchings were linked to misinformation spread over Facebook’s WhatsApp by right-wing Hindu groups, who circulated false videos and images of anti-Hindu violence. During yet another India-Pakistan standoff in 2019, social media played a role in shoring up nationalism, trust in leadership and xenophobia.

According to Dr. Santanu Chakrabarti, head of audience insight at the BBC World Service, disinformation spread like wildfire since the rise of Modi because many Indians feel that they have a patriotic duty to pass on information. Digital nationalism is therefore not simply top-down but involves a variety of actors, including everyday users, who may simply share certain messages to express a sense of belonging to a group.

The evolution of national digitalism in Vietnam is closely linked to the acceleration of China’s hegemony in the region and the complex relationship between the two countries.

China’s cyber nationalism stands out partly because of the country’s unique digital infrastructure and regulations. According to several experts, the internet facilitates digital nationalism in China. Platforms such as Weibo, WeChat and Tencent, which in themselves are reflections of national sovereignty, shape the nature of digital nationalism.

Much like Google, Twitter and Facebook, they come with their own political prerogatives, business models, regulations, and range of users and stakeholders. However, even though the state heavily regulates social media platforms and fabricates tweets to influence public opinion and reinforce its legitimacy, nationalist narratives online are not monolithic and, at least until recent years, not always supportive of the regime. According to researchers Xinxian Zheng, Jiajun Liu and Ji-Rong Wen, in the Chinese context, there is a “vibrant public sphere on the internet, especially on social media” capable of promoting nationalism that is spontaneous and sometimes critical of the regime.

China’s cyber digital nationalism has undergone considerable changes over the years, depending on domestic politics and international events. Geopolitical turmoil and territorial disputes such as Sino-Japanese relations, disputes in the South China Sea and, most recently, the COVID-19 pandemic shore up nationalism on the Chinese cybersphere. This is not surprising. Historically, these are subjects that “sell” because they are matters of national interests that have long triggered nationalist sentiments.

In 2012 and 2013, disputes about the sovereign status of the Diaoyu/Senkaku Islands, which led to anti-Japanese protests and rhetoric, and even to military tensions between Japan and China, were also on display on social media with messages such as “Diaoyu is China’s territory” or “We don’t forgive Japan!” or derogatory anti-Japanese rhetoric being commonplace. Interestingly, even though the regime heavily controls social media platforms, these nationalist sentiments were grassroots, spontaneous, heterogeneous and often critical of the Chinese state.

Researchers such as Christopher Cairns and Allen Carlson show that some Weibo posts criticized the regime for its “fecklessness vis-à-vis Japan” or even called for more action than Beijing seemed ready to take. According to Zheng, Liu and Wen, another category of users expressed national pride while demanding more diplomatic, liberal or human rights-centric approaches from their government. Digital nationalism is an expression of pride in the country first.

Since the start of the pandemic, this heterogenous expression of nationalism appears to be changing. The pandemic seems to be a distinctive moment in which domestic populations, including netizens, have embracedthe more assertive narratives used by Chinese state media and “wolf-warrior diplomats.”

Indeed, the latter have portrayed international discourses on China’s responsibility for spread of the virus as ethnocentric attacks on all Chinese people, and the surge in anti-Chinese xenophobia in the West has certainly given Beijing new ways to galvanize nationalist sentiments. In parallel to these negative narratives, diplomats and state media have also lauded China’s handling of the pandemic in comparison to other countries, particularly the United States. The Centre for Information Resilience uncovered evidence that fake networks also publish this type of pro-China propaganda on Twitter, Facebook and other platforms.

This scheme has sometimes gone awry. At the worst of the pandemic in India, a social media post from an account linked to the Chinese Communist Party posted an image that appeared to mock India’s handling of the pandemic. While the social media post was criticized, it reflects a level of digital nationalism that is more aggressive than it used to be.

Digital nationalism in China might become more monolithic over the next few months as President Xi Jinping, who sees online culture as a threat, imposes new regulations on tech giants and implements his new vision for education and culture.

The evolution of national digitalism in Vietnam is closely linked to the acceleration of China’s hegemony in the region and the complex relationship between the two countries. Online Vietnamese nationalism appears to be particularly vocal when it comes to defending Vietnam’s international reputation and sovereignty, particularly against the expansionist actions of China. Anti-China, anti-colonial sentiments among Vietnamese citizens and state actors are not new, but according to Dien Nguyen An Luong, the internet “has enabled anti-China sentiments to morph, evolve and manifest online,” and a new online community “has played an increasingly proactive role as vigilantes against content they deem controversial, inappropriate or detrimental to Vietnam’s image.”

As in the Chinese context, while the state still heavily cracks down on dissent, this new cohort of netizens is not necessarily state-sponsored or pro-regime, as a 2013 study by the SecDev Foundation showed. According to the study, although state actors often tap into this “vigilante force” to boost national unity, increase the legitimacy of the regime and advance foreign policy, anti-Chinese sentiments can occasionally turn into criticism of the regime’s foreign policy and its failure to protect national sovereignty, for example, in its disputes over the Spratly/Paracel islands in the South China Sea and Chinese investment in a bauxite mine in Vietnam’s central highlands. In both cases, Vietnamese online nationalists have criticized the Communist Party of Vietnam as being “too meek and subservient to China” and called for reforms that would bring the country out from China’s orbit. As in the Chinese context, for the state, there is a fine line between exploiting online nationalism and repressing it because it is critical of the regime. Digital nationalism can be beneficial to state leaders — until it isn’t.

Interestingly, Vietnam’s experience fits a broader pattern in recent years in which netizens from different countries in Southeast Asia have banded together to express fear about the decline of democracy and the growing influence of China. Social media movements such as the Milk Tea Alliance — a pan-Asian online community encompassing netizens from countries such as Thailand, Hong Kong, Taiwan, Myanmar, and occasionally Vietnam and the Philippines — express their skepticism about China’s role in the region and often try to combat Chinese nationalist (often xenophobic) trolls on social media. From Thailand to the Philippines, geopolitical and sovereignty disputes shore up among netizens both a sense of digital nationalism and the desire to defend the nation.

In the digital age, nation-states remain the largest political and cultural unit, and the World Wide Web is still a world of nations where disputes over territory, sovereignty and national identities are playing out. Thanks to its technological properties and multitude of actors, the online world has become a new sphere for the expression of nationalist sentiments that are more fluid, diverse and complex than ever, and contributes to the making and remaking of national identities.

This is occurring in some places for good, some for ill – but it is occurring regardless, and should be expected to continue, at an accelerating pace, as digital transformation accelerates. How the nations of the world respond will be fundamental to geopolitics in the decades ahead. 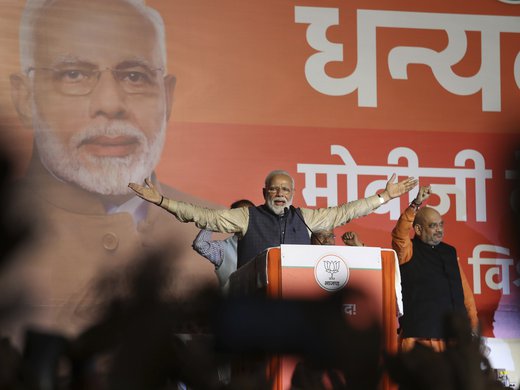 The dangers of nationalism in China and Japan