The Decades-old Dispute Behind Russian Provocations 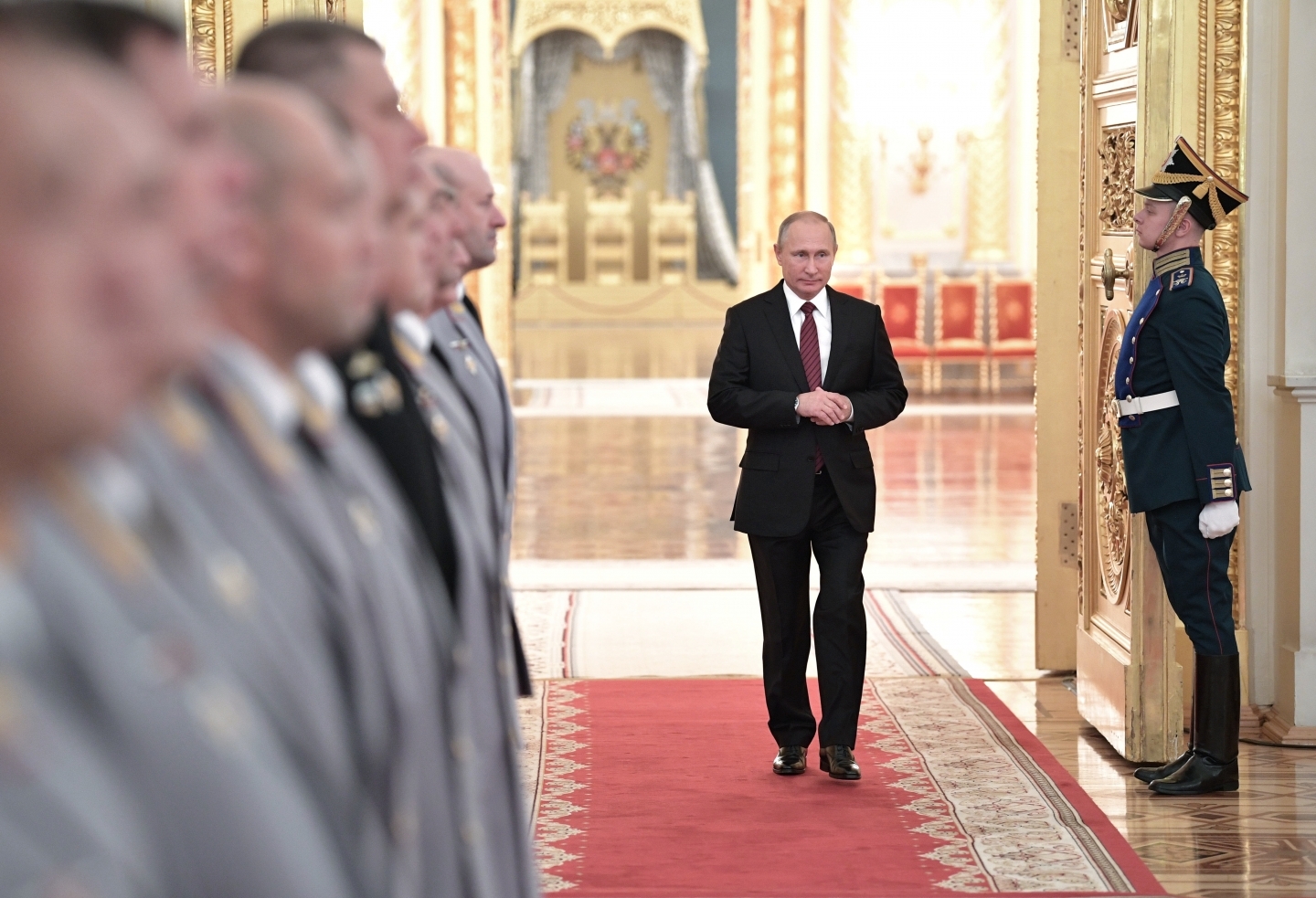 Russian President Vladimir Putin walks in a hall during a meeting with senior military officers in the Kremlin. (Alexei Nikolsky, Kremlin Pool Photo via AP)

On March 1, 2018, Russian President Vladimir Putin unveiled new weapons that he said rendered the missile defence systems of the North Atlantic Treaty Organization (NATO) “useless.” Such provocations are part of the storied past shared by NATO and Russia, but now the dramatic escalation in tensions between these historic adversaries threatens to trigger an arms race.

“I want to tell all those who have fueled the arms race over the last 15 years, sought to win unilateral advantages over Russia, introduced unlawful restrictions and sanctions aimed to contain our country’s development: All what you wanted to impede with your policies has now happened,” Putin said at his annual state of the nation address. “You have failed to contain Russia.”

The existence and efficacy of Putin’s newly announced weapons are uncertain, but Russia’s military power isn’t the only thorn in NATO’s side. Russia’s relations with NATO have been deteriorating for years. The alliance’s members have been concerned by Russia’s interference in Moldova since 2003, its invasion of Georgia in 2008 and Ukraine and Crimea in 2014, its cyber attacks against the Estonia in 2007 and later, its provocations in the Baltic Sea and the Black Sea, among other actions.

“This is happening it seems like on an almost daily basis,” said Alina Polyakova, a fellow at the Brookings Institution in Washington. “We have a Russian military ship passing very close to international waters, or close to a US or NATO asset, and this seems to be happening all the time.”

How NATO and Russia view Russia’s invasion of Crimea, the Ukrainian region that has been at the heart of Russian culture for centuries, and its subsequent support of rebels in the pro-Russian parts of eastern Ukraine, perhaps best illustrates their different understanding of Moscow’s actions. Is Russia, as the West sees it, trying to restore its standing in its sphere of influence — or is there more to Moscow’s actions?

“The Ukraine crisis is not behind the current state of relations between Russia and the West. Rather, it is a consequence of the policy that the Western countries, primarily the United States and NATO countries, conducted after the end of the Cold War,” Sergey Lavrov, the Russian foreign minister, recently told a Serbian news agency.

Those remarks go to the core of the ongoing crisis between NATO and Russia, a crisis that is unlikely to be resolved given that the two sides disagree about the very issues they are arguing about. Russia says that at the end of the Cold War it was assured that the Atlantic alliance would not expand eastward, as it has done to encompass parts of the former Soviet Union and its satellite states. Western officials deny that such an assurance was made.

Russia’s position has much to do with the aftermath of the fall of the Berlin Wall. The 90s were an era of euphoria in the West, but marked the beginning of the end of the Soviet Union and the breakup of the Warsaw Pact, the alliance of mostly eastern and central European countries that was supposed to serve as a counterweight to NATO. The dissolution of the Soviet Union caught the United States by surprise. American intelligence agencies hadn’t foreseen the events, and the United States attempted to deal with the fallout by seeking the unification of Germany. But the Russians would have to be convinced because it meant NATO troops could potentially be in an area adjacent to the border with Russia. Mikhail Gorbachev, the last Soviet leader, said he was assured by James Baker, the US secretary of state at the time, that “NATO would not move an inch to the east.”

Of course, that didn’t happen: the Czech Republic, Hungary, Poland, Bulgaria, Romania and Slovakia — all former Warsaw Pact members — are now NATO members, as are Estonia, Latvia and Lithuania, the Baltic states that were part of the Soviet Union. Those events continue to rankle Putin. As recently as 2014, he accused the West of lying “to us many times.…This has happened with NATO’s expansion to the east.”

But is that what the West did?

Christopher Clark and Kristina Spohr, both historians writing in The Guardian, pointed out that the claim that the Two-Plus-Four Treaty of 1990 — which involved France, the two Germanys, the Soviet Union, the United Kingdom, and the United States — “included guarantees barring NATO from expansion into Eastern Europe is entirely unfounded. In the discussions leading to the treaty, the Russians never raised the question of NATO enlargement, other than in respect of the former East Germany.”

Further, Clark and Spohr added, “Regarding this territory, it was agreed that after Soviet troop withdrawals German forces assigned to NATO could be deployed there but foreign NATO forces and nuclear weapons systems could not. There was no commitment to abstain in future from eastern NATO enlargement.”

Polyakova said that Russia certainly acts as if it believes that NATO made, and broke, a promise not to expand eastward. But, she argued, it’s not clear whether Russia actually believes this narrative or merely uses it for its own ends.

“What [the Russians] say makes it sound like they believe this,” she said. “That, in fact, Russia was screwed over by NATO, screwed over by the West in all these various ways…They use that narrative, as part of a broader narrative about how NATO undermined Russia, embarrassed Russia, humiliated Russia, didn’t really help Russia consistently, to drive home whatever policy agenda they are looking to achieve at the time.”

It is uncertain whether or not NATO offered Russia some kind of assurance. Russia was, however, offered something in exchange for German reunification. Bill Bradley, the former US senator, wrote in Foreign Policy in 2009 that Baker had acknowledged telling Gorbachev, “NATO will not expand one inch to the east.” But Baker told Bradley that by “east” he had meant East Germany — not all of Eastern Europe, as the Russians had understood. Even that changed, of course: German troops were stationed in East Germany as part of NATO. Ultimately, Presidents Bill Clinton and George W. Bush expanded the alliance even farther east, right into Russia’s backyard — an action that Russia continues to view as a provocation.

Nina Jankowicz, a global fellow at the Wilson Center in Washington, pointed out in an interview that despite Russia’s claims that it had been betrayed by NATO, the former Soviet states and Warsaw Pact nations that ultimately joined the United States-led alliance did so of their own volition.

“This is a choice these nations made on their own in many cases through referenda,” she said. “And it is their right to self-determination as sovereign nations to decide how they want to align themselves in terms of security, economic interests, etc. And Russia seems to think that this is some sort of deceitful action on behalf of the West, but in reality, these are sovereign choices made by sovereign nations.”

Nor were their paths to NATO membership easy, as Polyakova pointed out. She said there was a lot of resistance and debate among NATO members at the time about the inclusion in the alliance of the Baltic states — which were previously part of the Soviet Union — and Poland, the Czech Republic and Hungary. But the countries themselves advocated for NATO membership.

“And why did they do this? Because they wanted a security protection from Russia,” Polyakova said. “So, if the Russians say they are so concerned, and have been so concerned about this broad expansion of NATO and the EU, well, they have to look inside and think about why did these countries want to go the other way.”

According to Polyakova, the answer is a simple one: the group of nations seeking NATO membership “didn’t see many opportunities under the thumb of the Russian Federation.”

But Russia’s continued actions can be seen through the prism of its own interests. Since the end of the Cold War, its sphere of influence has rapidly declined. The country itself, once a global superpower, became reduced in stature in the 1990s under the presidency of Boris Yeltsin. During that period, Russia’s process of democratization was difficult as it moved to become a market economy. Those initiatives, implemented by Yeltsin, put Russia through wrenching economic changes. The state, which had in theory — during the Soviet years at least — provided cradle-to-grave support, struggled to perform basic tasks; Russia was far larger and more ethnically diverse than its neighbours that undertook similar reforms.

The economy crumbled — and the era of Russian greatness appeared to be in the past. Putin came along in 2000 and restored order, Jankowicz said. In doing that, he empowered and enriched himself and his friends. And, as Jankowicz sees it, Putin’s reign — and the circumstances that led him to power — leave no real path to democracy in Russia.

Even through waning global influence and the failure of Russian democracy, Putin has managed to remain a part of international conversations.

“By maintaining the strongman posture in Russia, he assures Russia a seat at the global negotiating table, which has informed his foreign policy certainly for his last two terms,” Jankowicz said.

Russia’s influence on and support for Syrian President Bashar al-Assad in that country’s seven-year-long civil war, its occupation of Crimea and its continued involvement in the Ukrainian civil war are examples of Russia’s newfound strength.

Putin boasted of that strength in his speech in Moscow. Major players including the United States and the European Union have imposed sanctions against senior Russian officials for their actions in Ukraine, but these have done little to deter the Russian president from acting to support his interests. At some point, those interests will clash with NATO’s, and the members of the Atlantic alliance will realize that they need to do more for collective self-defence. The Trump administration has emphasized it expects the bloc’s members to contribute the agreed-upon two percent of GDP to their defence budgets. Putin’s recent speech is a reminder of what awaits NATO’s Western European members at their borders.

Tensions between NATO and Russia are “probably at their worst point since the end of the Cold War,” Polyakova said. “There’s sabre-rattling on both sides.”

The mutual distrust between the two sides, accompanied by the fact there are few avenues for them to de-conflict, means that such sabre-rattling will likely be a feature of Russia’s relationship with NATO for some time to come. 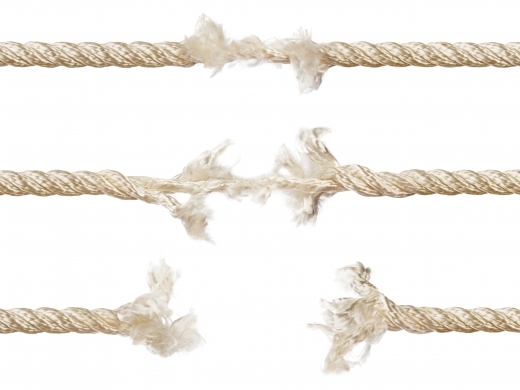 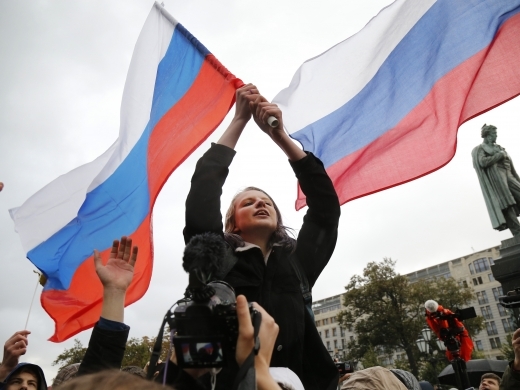