An epilogue to the New Thinking on Innovation series
Published: November 21, 2017

f there is one lesson we have learned from the postwar experience with growth and development in rich and poor countries alike, it is that there is no single path to success. This is even more so the case when we consider that economic structures are changing in fundamental ways and will change even further in coming years, driven by an ever-increasing amount of data, and the capability to process it for multiple commercial and public uses; advances in digital and sentient technologies; and the concomitant rise in the importance of intellectual property (IP) and technological standards. This is the fabric that now holds national and global economies together.

If a well-endowed, prosperous and well-run country such as Canada is not immune from the consequences of failing to take innovation strategy seriously, then the issue is widespread and merits serious public discussion. It has national policy and international governance dimensions. The contributions to this series of essays provide a rich array of proposals. Building on these, Figure 1 presents a framework for a national innovation strategy, containing four “buckets” of issues. To add to the complexity, it should be understood that in reality this is a Venn diagram, with multiple overlaps between the four issue areas. 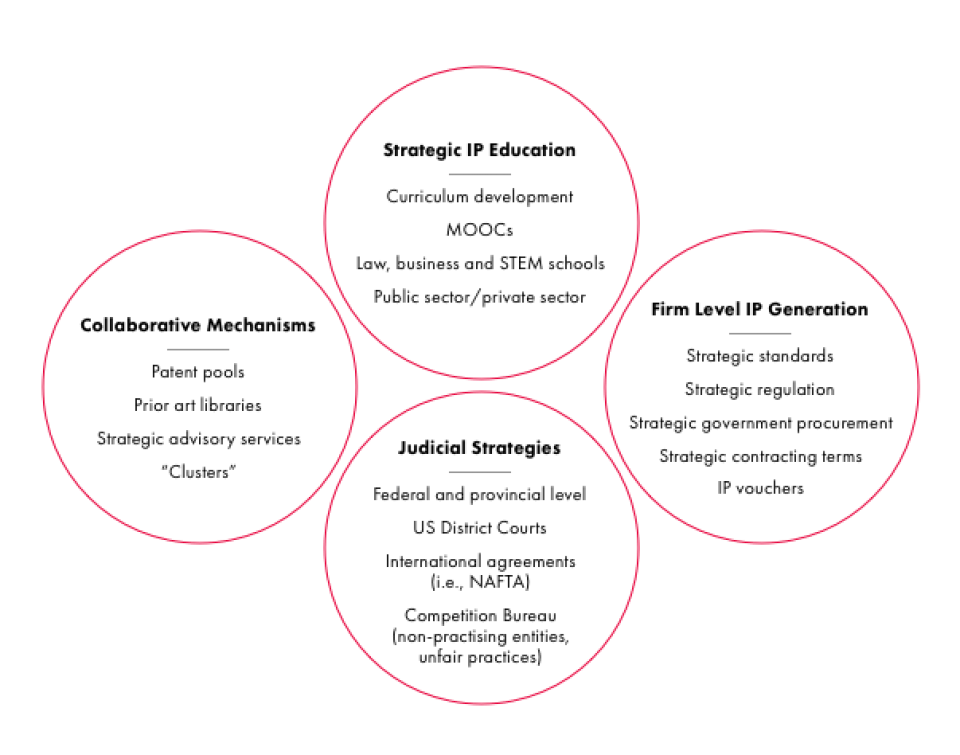 As several of the authors contend, IP awareness must start early and be integrated into academic curricula and business decision making from the very beginning. The quote from Leonardo da Vinci at the start of Myra Tawfik’s essay is instructive: “Study the science of art. Study the art of science.” One might add — study especially prior art, the existing knowledge base on which patents are granted as an advance to it (or not granted). In Canada, higher education is mainly a provincial subject. How provinces and individual universities and colleges enhance the IP-innovation content of their syllabi might vary, but the core intent should be clear: to weave offerings across at least three academic streams — law, business and STEM (science, technology, engineering and math) — augmented by the use of massive open online courses (MOOCs) and continuing education programs to keep entrepreneurs up to date on the key developments in the field. IP clinics, where pro bono guidance is offered to (often young, busy and struggling) entrepreneurs, might usefully round off this area of intervention.

There are other, more intense, collaborative mechanisms that emerge as part of an overall innovation strategy. Patent pools, be they sovereign, as Warren Clarke suggests, or sector-based, along with prior art libraries, provide strength in numbers to otherwise atomized players. Public-private partnerships such as geographic or industry-based innovation clusters are also likely to be effective. The usual caveats apply — government support has to be predicated on an inherent national development strategy and subsidies must be conditional on performance. Infant industries must graduate to adulthood. But in a sector characterized by high upfront costs, significant risk of failure and economies of agglomeration (that is, positive spillovers from being closely connected), it is difficult to conceive success without the participation of the public sector. Sensible public intervention is also consistent with the experience of success stories internationally.1

A third basket of interventions in innovation strategy centres on the thicket of issues where states and markets intersect. Technology is most effective — and profitable — when it becomes, by dint of superior functionality or by mandate, the industry standard. Interoperability is also crucial for networked processes. Understanding where and how regulations and standards that affect the adoption of a technology are set is important in supporting innovation. As Neil Desai suggests in his contribution, government procurement can be used in a World Trade Organization-compatible manner to support Canadian innovators. Data — widely described as “the new oil” (The Economist 2017) — is held by private and public entities in increasingly larger quantities. It can be aggregated, packaged, sold and used, for an expanding set of commercial and non-commercial uses. Managing this fast-growing sector to balance concerns about privacy, security, profit and the public good is only the latest challenge governments face within their innovation dossiers. Firms generate IP. But they do not do so in isolation from the range of government policies and regulations that alter the cost and profit curve of their development and application.

Last, and crucially, for small countries at least, when it comes to innovation, autarky is not an option. Rather, seeking foreign markets is an imperative. As several essays in this series argue, the international sector is both an opportunity and a challenge. The guiles of endless markets, industry standards and becoming the lynchpin to a global network are evident, but require a sophisticated understanding of how IP is negotiated and governed in existing trade agreements. A case can be made for refreshing the Agreement on Trade-Related Aspects of Intellectual Property Rights, which at present serves neither producers nor consumers of IP especially well.2 Any attempt — as was the case with the failed Trans-Pacific Partnership Agreement — to further entrench or extend current IP regimes favours existing IP holders and exporters at the expense of future ones. The US negotiating position in this matter comes into focus once this simple fact is understood. Michael Geist’s exposition of patent trolling lays bare the misuse of the court system to stifle innovation instead of protecting innovators. As developing countries such as China and India develop their own IP and innovation engines, their interests become allied with those of IP producers, while still sharing some of their former affinity to orient their IP regimes toward poverty alleviation and social objectives. This makes the Group of Twenty (G20) a potentially important venue to sort out IP issues at the international level. Put another way, if not the G20, then where?

At Bretton Woods in 1944 and in San Francisco in 1945, groups of powerful nations organized the economic and political arrangements that serve us, albeit imperfectly, to this day. Rapid developments in technologies, often referred to as the Fourth Industrial Revolution, are upending established structures in every part of the economy and society. Whether it is through the deliberations of the G20 or elsewhere, we need a Bretton Woods or San Francisco moment to bring order to and shape the current technology-fuelled environment for the global good. Here, as in other facets of international negotiations, the starting point is national policies and postures. Michael Spence’s dictum in the foreword bears paraphrasing here, too — successful societies are those where creativity is fully unleashed and innovation is deeply embedded.

The Economist. 2017. “The world’s most valuable resource is no longer oil, but data.” The Economist, May 6. www.economist.com/news/leaders/21721656-data-economy-demands-new-approach-antitrust-rules-worlds-most-valuable-resource.

Innovation and Prosperity in an Age of Transition

A foreword to the New Thinking on Innovation series

Modern Free Trade Agreements Are Not About Free Trade

Free trade, intellectual property and the political economy of discourse

Is It Time to Redesign or Terminate Investor-State Arbitration?

A clean break is needed to restore trust, but these stiff tests must be met

Rethinking Trade and Innovation for the Digital Age

How Trolls Are Stifling Innovators, Gamers and Netflix Junkies

After Failing to Commercialize, Universities Learn to Set Ideas Free

Why the $125-billion Stimulus Fund Must Include Digital Infrastructure

Universities Are Failing to Equip Entrepreneurs for Patent Battles

How to design a 2.0 intellectual property curriculum

Toward an Optimal Patent Regime for Canada

For all but the largest countries, national patent regimes do little to promote innovation

Cleantech and the Competitive Advantage of Nations

Ambition, not just innovation, is needed to develop commercially viable solutions with the potential to scale globally

Canada Has a Scale-up Problem, Not a Start-up Problem

In a knowledge economy, countries that work hand in glove with their technology companies will see the greatest economic returns

How Small Open Economies Can Leverage the Trade in Ideas

A Worthwhile Intervention? The Potential Role for a Sovereign Patent Fund in Canada

South Korea, Japan and France have set an example others can follow

How the G20 Can Stimulate Innovation

As fresh evidence emerges of a link between uncertainty and business pullback from research and development, here are four steps nations can take to unlock investment

Populism and the Global Governance of Intellectual Property

VIDEO: Dan Ciuriak on the Asymmetries of Freedom to Operate

VIDEO: Michael Geist on the Impact of Copyright and Fair Use on Innovation

VIDEO: Richard Gold on the Myth of Intellectual Property

VIDEO: Neil Desai on Infrastructure and Procurement Challenges in Canada

VIDEO: Benjamin Bergen on How to Create an Innovation Economy in Canada