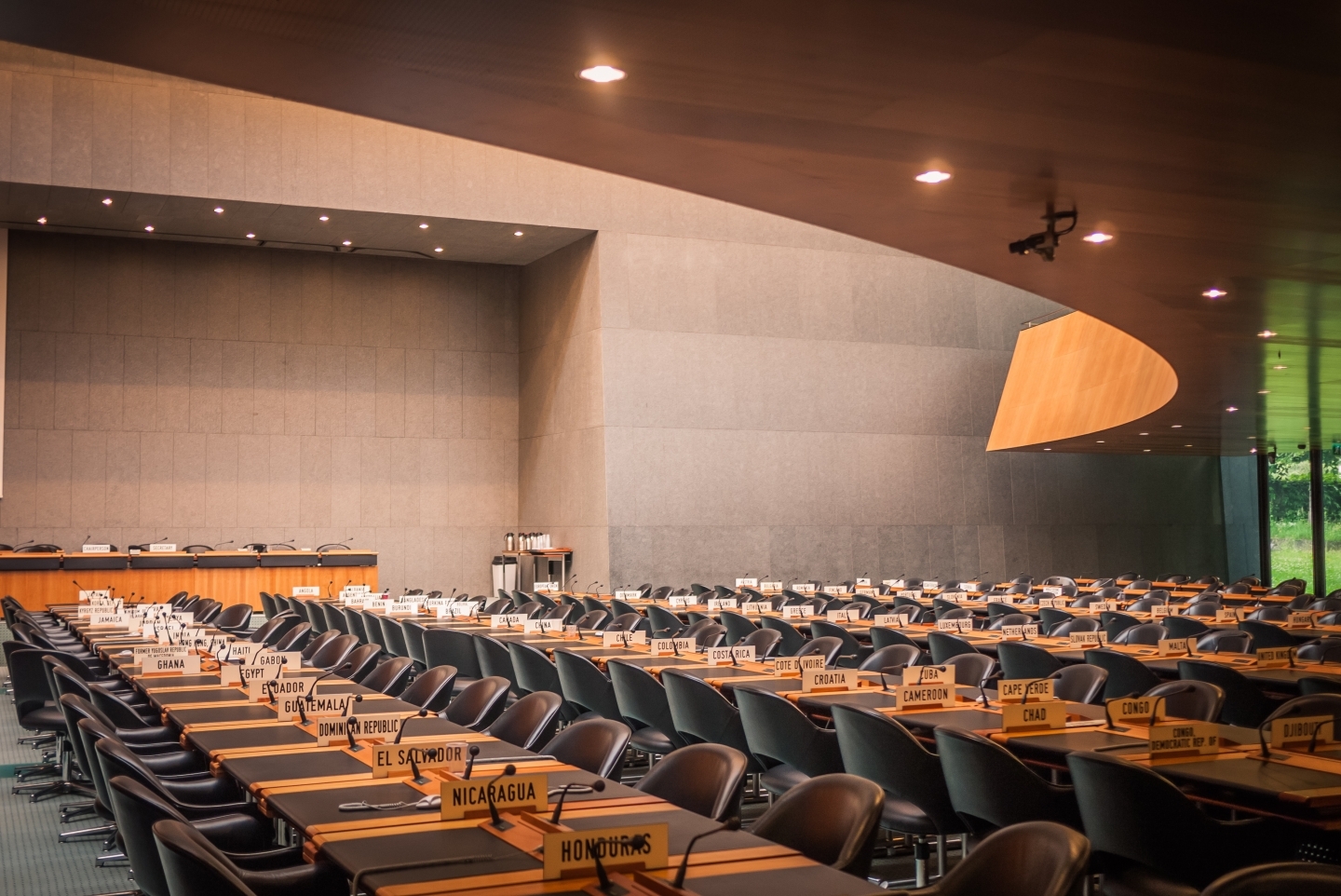 Meeting room with WTO members' nameplates on the desks at the WTO headquarters in Geneva, Switzerland.

The World Trade Organization is about to elect its first female director general. Be it Ngozi Okonjo-Iwealafrom Nigeria or Yoo Myung-hee from South Korea, she will find the WTO in a deep crisis.

The rules-based trading system has been cracking for a long time. It is now caught up in agonising geopolitical tensions, and the pandemic has exacerbated old problems.

Governments’ initial reaction of halting exports on medical supplies and medicines has further eroded confidence in the WTO’s capacity to ensure adherence to trade rules. As then European Central Bank president Mario Draghi pledged in 2012, the next director general must be ready to do “whatever it takes” to repair confidence in the WTO.

In Geneva, it is common to hear that the WTO is a “member-driven organisation”; ambassadors believe this is what makes it unique. However, governments are ultimately responsible for conducting all intergovernmental organisations.

What makes the WTO unique is the practice of interpreting the “member-driven” motto as a government’s monopoly on the right of initiative. This needs to be reconsidered.

In the WTO, all decisions are taken by consensus (read unanimity). A trade negotiator’s “instinct” is to use every tool to gain leverage in their horse-trading. Blocking a consensus comes in very handy. The recent surge in geopolitical tensions has made the “member-driven” monopoly unaffordable.

Admittedly, global trade tensions have intensified in the past three years, but a number of outdated and dysfunctional working practices have been undermining confidence in the WTO for quite some time.

Napping on problems and procrastinating on reform are also attributes that distinguish the WTO. Contrary to what happens at the International Monetary Fund and World Bank, in Geneva, problems can be ignored because the WTO has no independent watchdog.

The WTO’s toolbox of rules desperately needs to catch up with challenges posed by the digital economy, but no country is currently sitting in its driver’s seat. Yet ambassadors in Geneva can still block a consensus on even last century’s “no-brainer” issues, such as prohibiting subsidies to illegal, unreported and unregulated fishing. As a result, the organisation is all but paralysed, and its capacity to settle trade disputes has been severely damaged by Washington’s blockade of the WTO’s appeal “court”.

COVID-19 has exacerbated nationalist calls. Governments’ immediate reaction was to halt exports to ensure that personal protective equipment would be available for “family” first. That’s perhaps a reasonable impulse, but a difficult one to reconcile with interdependent economies. Riding on “national security” concerns, self-sufficiency hardliners lost no time in calling for the repatriation of supply lines.

As the crisis unfolded, many governments shut down their economies to slow the contagion rate. While all scrambled to support domestic production and consumption, only some could support “national” firms with unprecedented amounts of fiscal and monetary support. We should expect spillovers on trade.

In normal times, the WTO Secretariat responds to countries’ requests, and the director general preserves good relations with Geneva ambassadors by repeating “I am in the hands of members” (read, ambassadors’ hands). Yet, these are not normal times. The next director general will need to “unmuzzle” and energise her staff, and force herself out of the “member-driven” cocoon.

This crisis should not go to waste. Its consequences provide the next director general with an opportunity to force members to deal with three of the WTO’s most divisive issues.

First, how to balance countries’ right to choose their own corporate governance model with the WTO members’ right to discern governmental influence in corporate decisions. Second, what kind of special treatment could complement developing countries’ domestic efforts to take advantage of export opportunities. And, third, how to articulate consensual decision-making with collegial responsibility.

The next director general will need to blend courage and diplomacy to broker honest discussions on taboo issues. She will also need to rebuild confidence by promoting transparency.

To entice governments to engage in candid “policy dialogues”, the next director general should create a watertight “deliberation space”, carefully sheltered from the WTO’s negotiation and dispute settlement functions.

She will need to unleash staff’s creative thinking and kindle policy dialogues by submitting unrequested background documents with information and analysis. While such documents should propose a menu of possible reforms, the director general should avoid advocating for a specific policy action.

Here, she could emulate the IMF managing director, who, when she wants to press politically sensitive topics into the executive board’s meeting agenda, quietly asks some IMF staff to prepare, “on their own responsibility”, brief and well-argued papers called “staff discussion notes”. When these are published, they elicit comments that the executive board cannot ignore.

To avoid advocating for specific policy recommendations, the new director general should “lead from behind”. She could ask WTO staff to rely on analytical support provided by other international agencies.

Finally, she should exploit synergies to make transparency happen. The IMF carries out annual consultations with the authorities of its 189 members. During these “Article IV consultations”, IMF staff can discuss trade-related policies, but lack WTO staff’s granular familiarity with trade issues. There is ample room for the next director general to increase cooperation between the IMF’s surveillance function and the WTO’s analogue trade policy reviews.

All these proposals would have minimal or negligible budgetary implications and none would require approval by members. They will only depend on the next director general’s determination to do “whatever it takes” to save the WTO.

This article first appeared in the South China Morning Post.