A decade ago, global policy makers pulled the world out of a profound economic crisis. With risks to the global economy on the rise, CIGI Senior Fellow James Haley asks: Could today’s leaders do the same? 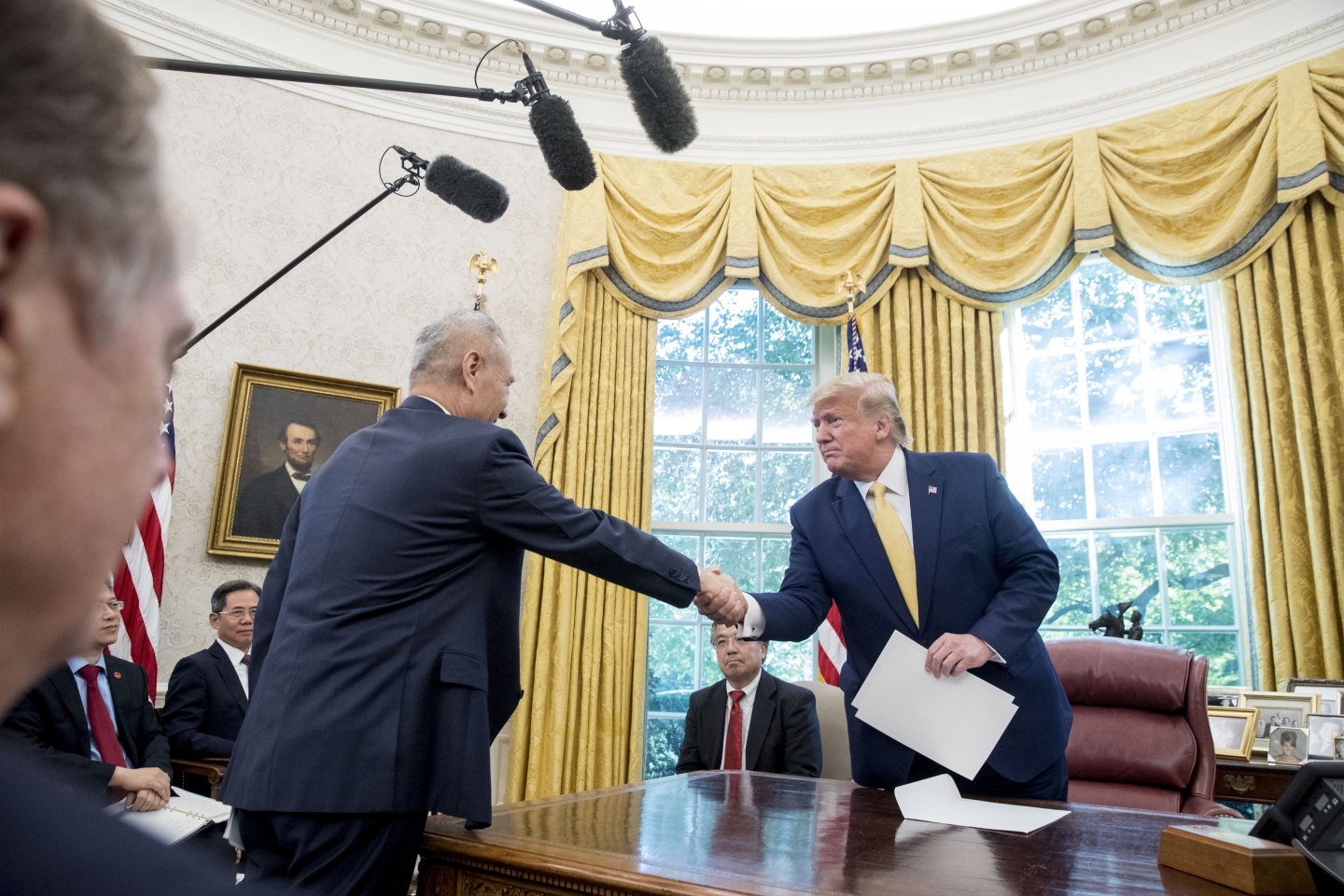 President Donald Trump shakes hands with Chinese Vice Premier Liu He after being given a letter in the Oval Office of the White House in Washington, October 11, 2019. (AP Photo/Andrew Harnik)

A decade ago, the global economy was reeling from the effects of a financial crisis so profound that many feared a repeat of the Great Depression. Thankfully, that disaster was averted, because for a brief, shining moment, global policy makers responded appropriately. Group of Twenty (G20) countries adopted a comprehensive, coordinated and calibrated package of stimulus measures to thaw credit markets frozen by a panicked rush to safe havens, and to resuscitate economic activity suppressed by uncertainty.

As the 2009 Pittsburgh G20 communiqué noted with respect to that response “it worked.” By late 2009, the fall in output, trade and employment was halted and growth was restored. But all too soon, thoughtful policy succumbed to other imperatives. By 2010, key countries around the globe were practising a politically motivated fiscal austerity that stymied recovery. While timely policy action prevented another Great Depression, premature fiscal tightening propagated a Great Recession marked by stagnant wages and unemployment. At least in part, that recession fuelled the populism and economic nationalism that now cloud the global economic outlook. And as 2019 draws to a close, the risks to the global economy may be growing.

Perhaps the biggest risk to sustained growth is the pervasive threat of a trade war. US President Donald Trump’s administration is making a concerted effort to disrupt the rules-based global trading system. Ostensibly, the goal is to address “unfair” trade practices, which the president argues result in US trade deficits. The more likely intent is to generate uncertainty about access to the US market and thereby incentivize firms to move manufacturing jobs to the United States.

These erratic US trade policies have weighed heavily on investment — which British economist John Manyard Keynes long ago argued was subject to “animal spirits” (or expectations of future profitability, which can shift suddenly and are inherently unobservable) and thus the most volatile component of output. Corporate investment has fallen around the world, as firms contemplate the implications of Trump trade policy on their global value chains. Growth has stalled, with Europe at risk of recession.

At least in part, that recession fuelled the populism and economic nationalism that now cloud the global economic outlook.

The outlook is not encouraging; notwithstanding a modest improvement in the US trade imbalance as US growth has slowed. The policies that the US president promotes, in particular the budget-busting tax cut passed in 2017, have a deleterious effect of US trade deficits. Because trade balances are driven by macroeconomic factors — underlying imbalances between saving and investment rates — Trump administration tariffs may shift the source of trade deficits from China to, say, Vietnam, but are unlikely to eliminate the trade deficit. With the 2020 US general elections looming, and the president’s policies failing, trade policy could become even more erratic.

Whatever happens with respect to trade policy, US growth has and will continue to slow as output converges on the underlying potential output of the economy. To some extent, however, growth has exceeded expectations in 2019, owing to buoyant consumer spending despite stagnant wages. It’s unclear whether that trend can continue.

Here, too, there is reason to be cautious. Household spending has been fuelled by consumer borrowing. That pattern can be sustained as long as the debt-carrying capacity of household balance sheets is not exhausted. But once that constraint is reached, further increases in debt would have to be supported by higher wage growth. And while there is some evidence of wage pressures, which would be welcomed by all, a sudden acceleration of wage growth could trigger the US Federal Reserve to raise interest rates to head off nascent inflation. Those higher rates could, in turn, have implications with respect to another risk to the outlook, highly-leveraged corporate balance sheets.

A key lesson from the global financial crisis was the danger that highly leveraged banks posed to financial stability. Post-crisis Basel III regulatory reforms therefore apply a limit on the leverage ratios of large, internationally active banks. This measure, like other liquidity and capital buffers, should make global banks more resilient to a range of shocks and reduce systemic risks. But, as large global banks have become more stable, risks may have migrated from financial intermediaries to financial markets.

Since the crisis, there has been a significant increase in lending to highly leveraged firms. With balance sheets stretched by high debt burdens, an unexpected increase in interest rates could create debt-servicing difficulties in the corporate sector. Severe problems could force firms into bankruptcy, leading to disruption to creditors, suppliers and workers. 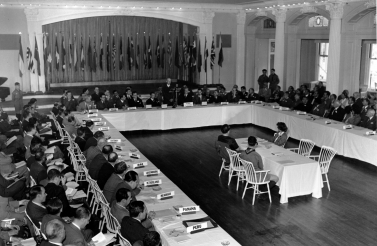 Recommended
The International Monetary Fund at 75: Evolve or Risk Irrelevancy

Worryingly, this lending has been facilitated by the securitization of highly leveraged loans through collaterized loan obligations (CLOs). These instruments are analogous to the synthetic assets based on pools of mortgages that fuelled the pre-crisis housing boom, and which did such lasting damage when they began to implode in 2007. For the avoidance of doubt, CLOs are not the same instruments and likely do not pose the same risks to the financial system. However, they have enabled some firms to take on high debt burdens, making them vulnerable to weaker earnings or higher interest rates.

A large share of CLOs can be found in the portfolios of US asset management companies, which have grown considerably over the past decade. Since these firms are capitalized by those investing with them, in theory, asset management companies should not pose a significant threat to financial stability. At the same time, the rapid growth of assets under administration could be a source of market volatility if asset managers’ investment decisions are highly correlated. A few firms making synchronous decisions to reduce holdings, for example, could generate large price movements that have knock-on effects throughout the financial system. High volatility could trigger trading algorithms that magnify price movements in a panicked “electronic herd” effect (a term coined by Thomas Friedman) that inadvertently produces asset fire sales and systemic risk, as investors simultaneously sell assets in a panicked rush to liquidity.

The Unintended Effects of Liquidity Regulation

The possibility of market volatility underscores the importance of ensuring the efficient allocation of liquidity across the financial system. Post-crisis reforms have increased liquidity buffers on large banks, making them less vulnerable to the kinds of asset fire sales that did so much damage a decade ago. But concerns have been raised that these reforms could exacerbate problems of illiquidity in the event of severe disruption. Such reforms could incentivize banks to hoard liquid assets when such assets are most needed to limit the propagation and transmission of liquidity shocks. While the disruption in US money markets in September, which caused short-term interest rates to briefly spike, may be unrelated to the possible effects of regulation, it underscores the need to carefully monitor market liquidity for signs of possible dysfunction.

All these risks point to the need for vigilance by central banks around the world. In this respect, another risk gaining prominence is the worrying possibility that central banks operating at, or close to, the zero lower bound on nominal interest rates may be less capable of supporting growth in the face of a negative shock to output. The so-called lower bound arises because, once interest rates are at zero, it is unclear that traditional monetary policy can force interest rates below zero. As a result, while there is no limit to the extent to which central banks can raise interest rates to contain inflationary pressures, they are limited in the extent to which they can provide the necessary monetary stimulus, should growth falter.

Eventually, there will be a shock that threatens global growth. When that occurs, the size and impact of the downturn will be determined by the crisis management response.

This asymmetry in potential responses to inflationary pressures, on the one hand, and signs of economic weakness on the other hand, underscores a fundamental shift in how monetary policy is framed. Before the crisis, most central banks evaluated the need for monetary tightening or easing by assessing whether output was above or below the estimated full employment potential capacity. In the low-interest-rate environment that has prevailed since the crisis, however, central banks have put more emphasis on whether the policy interest rate they control is above or below a hypothetical “equilibrium” rate that is consistent with market equilibrium. And, in a world of aging populations with higher savings rates, that equilibrium rate is widely believed to be falling.

The concern is that, if the equilibrium rate is declining over time, and the policy rate is already at, or near, the zero lower bound, central banks may not be able to stimulate the economy; that monetary policy is losing its potency to stabilize the economy. Central banks would undoubtedly draw on, or develop, new instruments, such as quantitative easing, which was deployed after the crisis. Yet, however effective such policies may be, there is still a risk that the immediate, dramatic and coordinated interest rate cuts that helped arrest financial panic and stabilized the economy early in the global financial crisis are not possible.

There is good news in this year-end assessment of risks to the global economy: post-crisis reforms have enhanced the resiliency of large international banks. Most important, capital and liquidity buffers of large internationally active banks have been raised, increasing the resiliency of these banks. Derivatives contracts, the financial engineering products that spread financial dysfunction, are now largely cleared through central clearing parties, which should reduce the risk of asset price fire sales. And a suite of macroprudential policy instruments has been introduced to limit the accumulation of systemic risks associated with possible externalities and banks that grow too big, or too complex, to fail.

But even that good news is not unconditional. There are growing concerns that efforts to reduce regulatory burdens, and to strike a better balance between financial stability and efficiency may have gone too far. We are unlikely to know the answer until one of the risks outlined above (or some other, unidentified, risk) is realized.

One thing is certain. Eventually, there will be a shock that threatens global growth. When that occurs, the size and impact of the downturn will be determined by the crisis management response. Perhaps the biggest threat facing the global economy is the corrosive effect that the Trump administration’s attacks on international cooperation has had on America’s standing with traditional allies. A hegemon that is unwilling, or unable, to provide leadership in times of common peril could prove disastrous to all.