Iranian people have taken to the streets to call for the clerics to be reined in, for the end of foreign military action and for the end of dictatorship in Iran 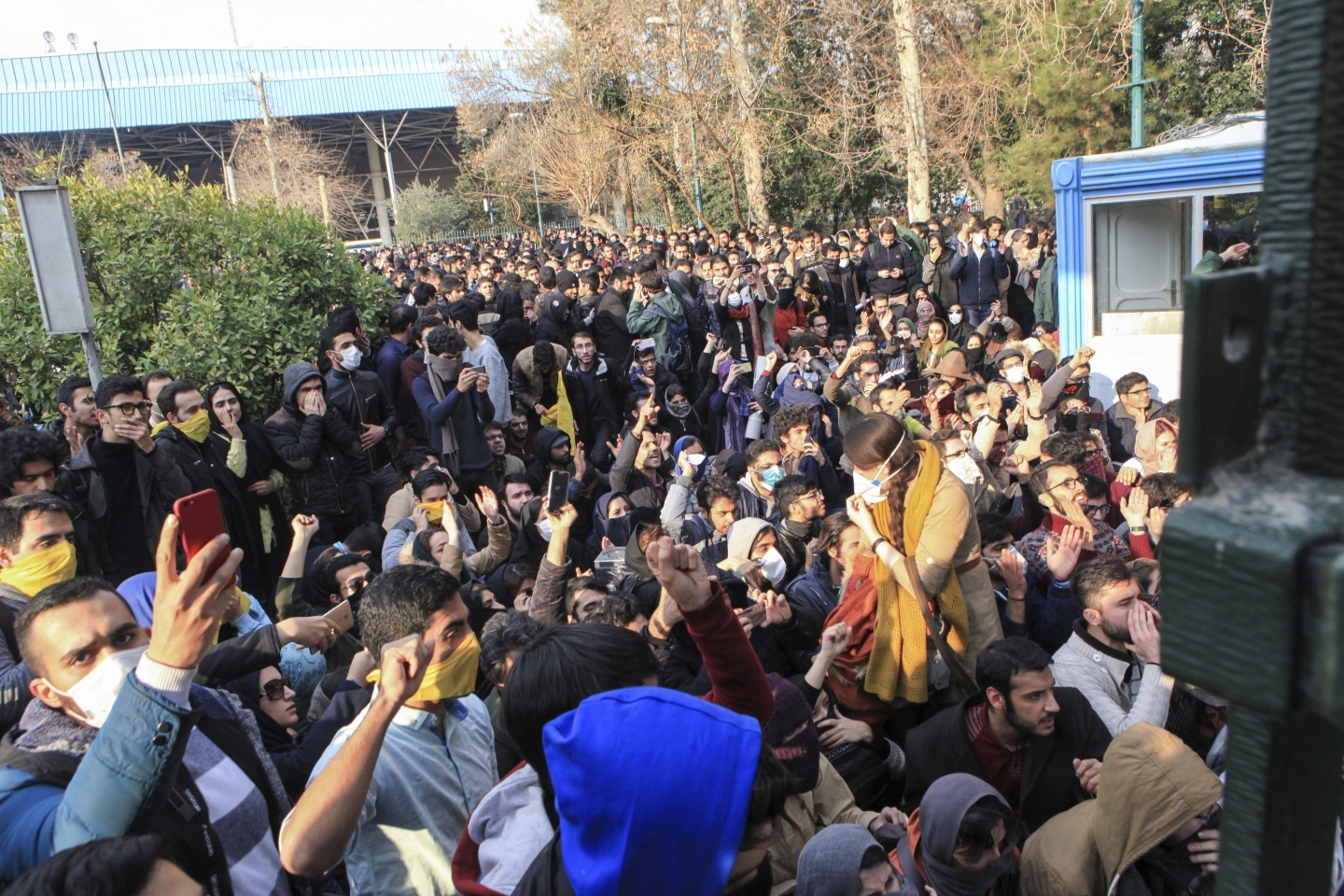 A wave of spontaneous protests over Iran's weak economy swept into Tehran on December 30, 2017. (AP Photo)

The 1979 Iranian Revolution propelled the clergy, and its then-supreme leader Ayatollah Khomeini, to power because the revered Shia leaders stood in contrast to everything the monarch Reza Shah Pahlavi had represented – extravagance, corruption and entitlement. Today, the sporadic and spontaneous street protests across Iran's hinterlands are a reaction to the reality that the clergy are now the very embodiment of corruption and entitlement and have stifled the already struggling Iranian economy.

For the first time in open public debate, provoked by leaked items from the Iranian budget, the questioning of the clerics' economic control of Iran and its blatantly corrupt ways are coming to a head. This is the internal combustion that Iran needs to move away from the power of the clerics and rid the country of its dogmatic theocracy. Although a cleric himself, President Hassan Rouhani may have taken a risky move last month to expose the entitled theocrats' share of the government's 2018 budget.

Entrusted with the job of stimulating the Iranian economy on the heels of an international nuclear deal that he stewarded and the clerics opposed, unemployment remains high for youth, inflation is soaring (particularly on food items), real wages are stagnating and housing remains expensive and unaffordable for many. Average Iranians are not sharing the benefits of an economy that technically grew by 12 per cent last year and is forecast to grow nearly 4 per cent this year. Rouhani's government publicly announced they would be cutting off government subsidies and services to some of the poorest Iranians.

More interesting were the items kept off the public budget release which were revealed to the masses in a series of leaks, perhaps even orchestrated by Rouhani himself to take the heat off his government and the international nuclear deal that was supposed to deliver economic prosperity. The budget leaks showed that the clerics were given billions to pay for religious libraries, religious foundations and to lead Friday prayers. This was on top of the purported further billions allocated to finance the Iranian Revolutionary Guard Corps (IRGC) – a militia force tasked with exporting the regime's theocratic ideology and who are fiercely loyal to the clerical establishment.

The IRGC and its clerical backers have long espoused the false notion that they have also been defending Shia shrines abroad, but the Iranian people see billions wasted to aide the brutal Assad regime in Syria by fighting rebels in areas where no Shia shrines are in sight. Not to mention the billions used to prop up the Iraqi military in its struggle against Islamic State, support and train the Yemeni Houthi rebels and finance the notorious Lebanese terror organization Hezbollah .

Protesters shouted against the IRGC's spending abroad and called on the government to spend more on the poorest Iranians at home. But the IRGC are not just a religiously inspired militia force, they are also shrewd business people with their own conglomerates. They run a parallel economy in Iran to line their own pockets further and skew the free market fundamentals of the Iranian economy while receiving billions from the state budget.

Having long suspected the extent of the regime's corruption, and now armed with the information from the budget leaks, the Iranian people have taken to the streets to call for the clerics to be reined in, the end of foreign military adventures and to the end of the dictatorship. Protesters have even torn down and burned multiple posters of Supreme Leader Ayatollah Ali Khamenei, the head of the clergy. Simply unheard of nearly a decade ago when the 2009 Green Movement captured Iranians' revolutionary spirit is the outright loathing of the corrupt religious establishment.

This revolutionary moment is even more interesting because the clerics had depended on the support of the very towns and cities that have taken to the streets in protest. The clergy are finally being seen for what they are: kleptocrats hiding behind the veil of religious piety.

The Trump administration, and the eager Israelis and Saudis, can ruin this all by taking credit for the protests or for calling for regime change. Foreign collusion, real or perceived, will feed into the conservative hardliner's mantra that this is less about corruption and more about international and regional politics.

Iran's kleptocrats are finally being exposed. Staying out of Iran and letting this movement grow organically is the best way to bring about the change that Iranians and the world want to see.