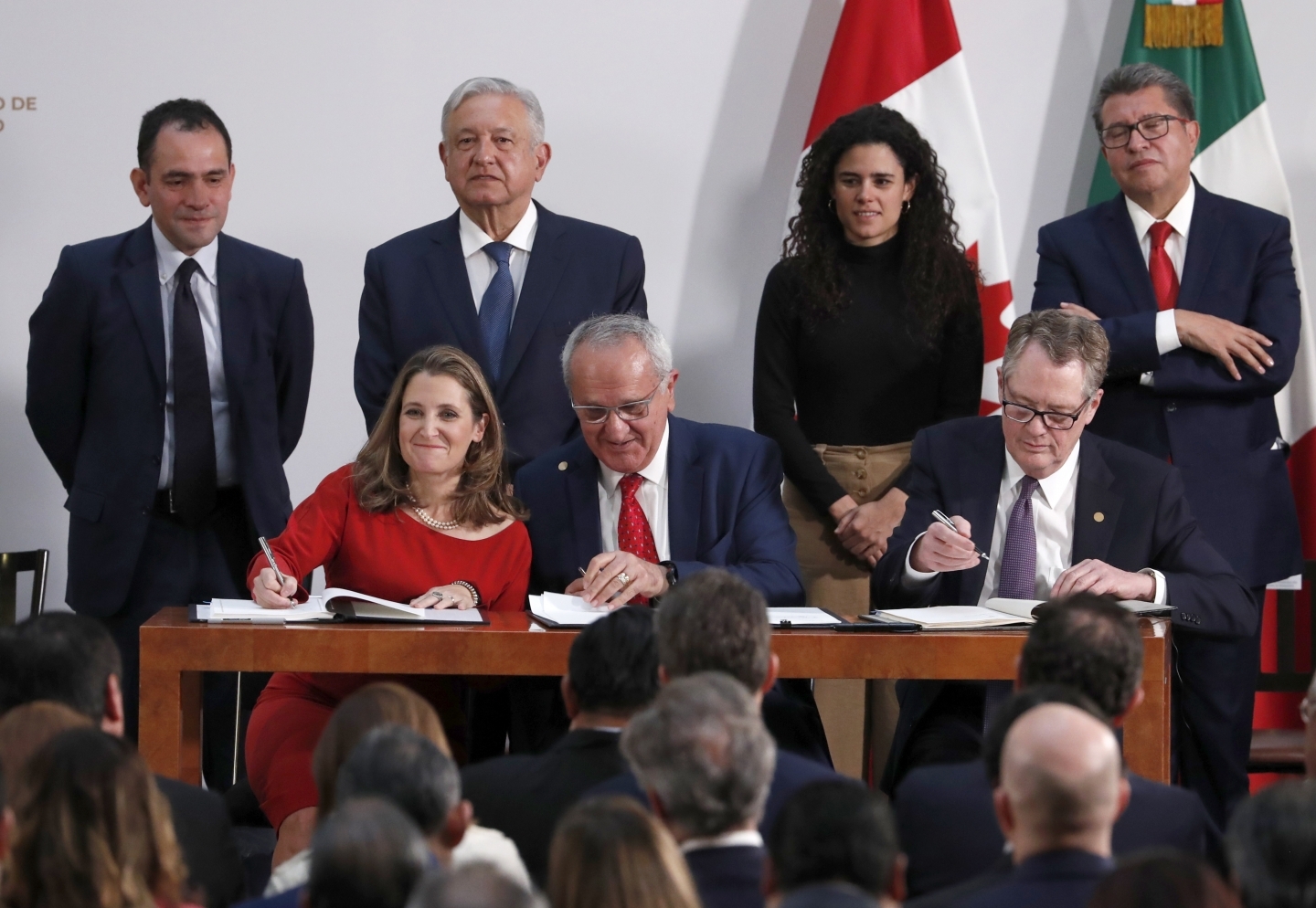 A long-awaited revamp of the North American Free Trade Agreement (NAFTA, now called the Canada-United States-Mexico Agreement, or CUSMA) is expected to be approved by the US Senate in the coming weeks.

Once the United States signs off, the deal will move to the Canadian Parliament for a ratification vote soon after the House of Commons reconvenes on January 27. Experts following negotiations don’t expect legislators in any of the three countries to propose additional amendments, although a lot about the new restrictions will remain unclear for months or longer after final passage.

During late-round negotiations, many additional provisions were included (or removed), several of them installed by the Democrat-controlled US House of Representatives. CIBC Capital Markets’ chief economist, Avery Shenfeld, suggested that many last-minute changes — specifically those in the areas of labour, environment and biologic drugs — had been on Canada’s wish list. Here’s a user’s guide, of sorts, to some of the latest adjustments and why they matter.

The final agreement requires that 70 percent of the steel used to make automobiles in North America come from one or more of the three CUSMA countries. Clifford Sosnow, an Ottawa- and Toronto-based international trade lawyer and partner at Fasken, suggests that the provision was intended to discourage Mexican automobile plants from importing raw steel ingots from China, in particular. In a compromise with Mexico, the provision calls for a seven-year transition period. However, Sosnow notes that the deal doesn’t seek to protect the North American aluminum industry, except to say that policy makers will review the situation in 10 years. “Ten years is a long time for the aluminum industry to sit on their hands and say we won’t say anything further on this one,” he said. 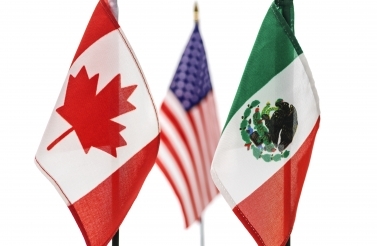 Gary Clyde Hufbauer, a senior fellow at the Peterson Institute for International Economics in Washington, DC, called it another protectionist concession made to the steel industry. For Shenfeld, the steel content measures are a “mixed bag”: the restriction trades a potential win for the North American metals industry with a potential loss for North American automakers via potentially higher steel costs, as they compete with car manufacturers outside of North America.

CUSMA requires that 75 percent of work on automobiles be completed within North America and that 30 percent of the work must be completed by workers earning US$16 an hour, a percentage that will gradually rise to 40 percent by 2023. The package, pushed by Democrats in Congress and by labour unions, includes a provision with new rules nudging Mexico, where the average hourly wage is roughly one-third that rate, to enforce their own labour standards. Sosnow notes that the package includes an annex allowing for collective bargaining rights and to ensure that votes and union leadership selections are held in private. It also allows any country to ask that a panel be set up to audit a facility to see if these rules are being met. Nevertheless, the provision doesn’t provide a lot of information about procedures for investigations or enforcement mechanisms for non-compliance. “It is a very facility-specific type of compliance,” Sosnow said. “Labour arbitration panellists can go do an investigation of a facility, but it’s not clear what their rights are when they get to the facility. Can they demand that information is provided to them? Can they get historic information?” He added that the penalty for non-compliance is that the facility will be prohibited from trading with the United States and Canada. However, questions remain about the type and length of restrictions, and the process for getting negative rulings lifted. Peterson’s Hufbauer wonders whether the US Trade Representative (USTR) will be eager to launch cases seeking compliance with the labour provisions. “Labour unions may complain but it is up to the USTR to decide whether to bring a case,” Hufbauer said.

The revised CUSMA includes new environmental protections, including the creation of an interagency committee to oversee countries’ compliance with environmental standards. Sosnow notes that, again, this provision is aimed at pressuring Mexico to comply with multinational agreements and CUSMA environmental rules. The package requires all three countries to ratify environmental deals they are party to, in law. The changes seek to give the country alleging a violation more power when they bring concerns before intergovernmental dispute resolution panels. “The burden historically has been on the alleging party to prove there is a violation,” Sosnow said. “Now, the one who alleges is presumed to be right and the responding party has to show that they [the alleging party] are wrong.” He added that the changes seek to make it “less of a hill” to climb to make a complaint, and will be coupled with greater scrutiny of the country’s compliance, because the evidence burden shifts onto that country to show they haven’t violated rules. “Countries may have more authority to bring cases about illegal species trade or illegal logging, for example, before dispute resolution panels,” he said.

A provision in the package that sought to give drug companies 10 years of intellectual property protection across all of North America was removed — a major loss for the pharmaceutical industry. Instead, Canada, the United States and Mexico will each continue to have authority over when cheaper generic copies of drugs can enter their respective markets. Democrats on Capitol Hill have been pushing for fewer years of protection, arguing that such a change would increase competition and improve access to affordable medication. Under Canadian law, drug corporations have eight years of test data protection for biologic drugs, while in the United States they are given 12 years of test data exclusivity. “Democrats wanted five years of data protection and they want congressional authority to determine what the number is,” Sosnow said. “It is safe to say that the pharmaceutical industry is not pleased.” CIBC’s Shenfeld noted that it was the United States, not Canada or Mexico, that had asked for longer protection for biologic drugs, so the surprise was that “they rolled that demand back again, perhaps to leave the door open for US policy to change in that direction in their own market.”

The package also includes tougher rules that essentially prohibit one country from blocking the formation of dispute resolution panels. Sosnow notes that one major complaint about NAFTA, which was signed in 1992 and went into effect in 1994, was that essentially no challenges have been brought before existing arbitration dispute panels. “There has been only one arbitration panel case on a country-to-country level heard since NAFTA was formed,” Sosnow said. A key problem was that a country could essentially block the formation of arbitration panels by choosing not to agree to a roster of panellists. The revised package allows arbitration panels to be formed and to consider a complaint even if one country decides not to participate in choosing panellists. “Parties historically could sit on their hands and say, ‘This isn’t going to happen,’” Sosnow said. Nevertheless, Peterson’s Hufbauer points out that it will be unclear how effective the new arbitration panels will be until a few cases have been heard. “If a country doesn’t want to have something arbitrated, they will work the midnight candle to get around it,” he said.

Experts following the new NAFTA all say that the real final hurdle will be US Senate approval, followed by Canadian parliamentary ratification. Senate Finance Committee Chairman Sen. Chuck Grassley (a Republican and the senior senator from Iowa) believes that the package will be “overwhelmingly approved” by the US Senate, but also noted recently that a vote could be delayed by a Senate impeachment trial against President Donald Trump. On January 10, House Speaker Nancy Pelosi said that she will deliver articles of impeachment to the Senate shortly, which could trigger a Senate trial almost immediately. Even so, once CUSMA is approved by the United States, expect final Canadian ratification and a tri-country signing ceremony to follow in short order. “Parliamentary ratification shouldn’t be a problem since the Conservative Party also supports the deal, and the Liberals will obviously vote for it,” said Shenfeld. “Canada will not propose any amendments.”