A New Club of G7 Leaders Try Getting to Know Trump

The Group of Seven (G7) summit in Taormina, Sicily, holds particular significance in the context of the growing fragility of global governance.

The gathering taking place Friday and Saturday is the first G7 summit for most of the leaders attending. This holds true for newly elected French President Emmanuel Macron, British Prime Minister Theresa May, and the summit’s host, Italian Prime Minister Paolo Gentiloni. It is also the first summit at the G7 level that US President Donald Trump is attending.

Many expectations for the summit centre on how President Trump will articulate the group’s international agenda vis-à-vis the positions of his fellow leaders, and the political space that they will carve out to preserve the status quo in global governance and to block further hindrances.

In principle, the G7 provides a potentially very useful platform for engaging President Trump internationally. Compared to the Group of Twenty (G20), which Trump’s predecessor, Barack Obama, approached as the “premier forum for international economic cooperation,” there is only a handful of participants, and the protocol is reduced to a minimum. Leaders can afford to hold intimate conversations through which they typically build, over time, close personal relationships.

The more fluid agenda at G7 summits enables leaders to modulate the topics of conversation based on their own preferences and needs, and to conduct the summit in a more relaxed, informal setting. Compared to G20 summits, where formalities prevail and leaders arrive from their respective capitals with prepared speeches ready for presentation, the G7 still allows rare moments of spontaneity for its participants.

For the Trump presidency, which exudes an unusually personalistic style, the G7 setting may help to build a greater shared understanding with the world’s most important country, notwithstanding the group’s evident limitations in terms of composition and representativeness across countries. 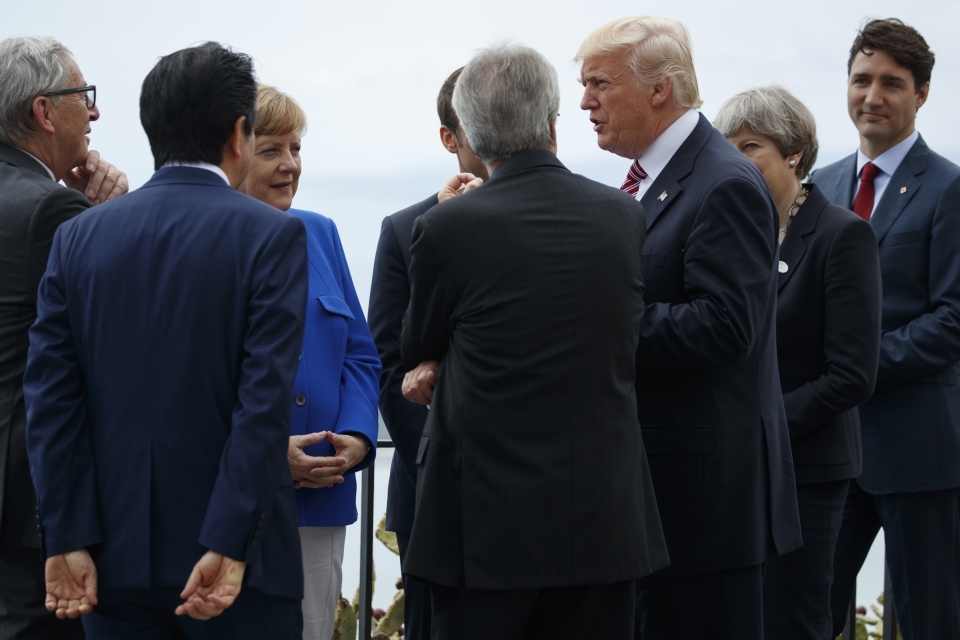 Preparatory work in the lead-up to the Taormina summit has focused on enhancing the agenda items of common interest, which will emphasize security aspects, specifically those related to North Korea, Iran and Syria, and the fight against terrorism following the tragic events in, among other places, Nice, Berlin and — most recently — Manchester.

On the economic front, the Italian president has identified a common agenda of commitments to foster growth and investment, the fight against tax evasion of multinationals, the financing of terrorism and, finally, the customary commitment against competitive devaluation of currencies. Exchange rate depreciation to obtain undue advantages for exports is a domain in which the United States wants to reiterate its warning to some of its G7 partners, such as Japan and, in particular, Germany — whose record current account surplus, reflecting in part an implicit subsidy provided by the single European currency, is followed with concern in Washington.

That said, tensions with respect to exchange rates are not likely to abate following the Taormina summit. The current environment is not conducive to pursuing the sort of cooperation that we witnessed in the Plaza Agreement of September 1985 and the Louvre Accord of February 1987. Simply put, the euro area and Japan would be hesitant to agree to a meaningful appreciation of their currencies vis-à-vis the US dollar, given their already modest growth outlook.

Further hindering the prospects for cooperation on the exchange rate is the fact that the European Central Bank (ECB) is responsible for the conduct of monetary policy in the euro zone. The ECB’s clear but narrow mandate of price stability — attaining an inflation rate close to but below two percent — places a ceiling on its willingness to join any currency plan agreed upon by G7 governments, especially if it would place its mandate and independence at risk.

Relatedly, reaching consensus on trade is unimaginable; the recent communiqué issued after the May 11-13 G7 finance ministerial meeting in Bari, Italy, almost avoids reference to it. Negotiations between the United States and the European Union on the Transatlantic Trade and Investment Partnership have stalled. Germany continues to be included in a special monitoring list drawn up by the US Treasury in its semi-annual report to Congress of countries that are close to meeting all the criteria for being labelled exchange rate manipulators. Indeed, a country running a current account surplus with the rest of the world in the order of eight to nine percent of GDP is not a particularly enticing trading partner for the United States.

Among the agenda items Gentiloni has had to capitulate on is a substantial reference to tackling climate change. At least, he succeeded in obtaining assurance that Trump would not use the summit platform to renege on the important commitments Obama signed at the Paris UN Climate Change Conference last year.