Saudi Journalist's Disappearance Is a Stain on the Crown Prince 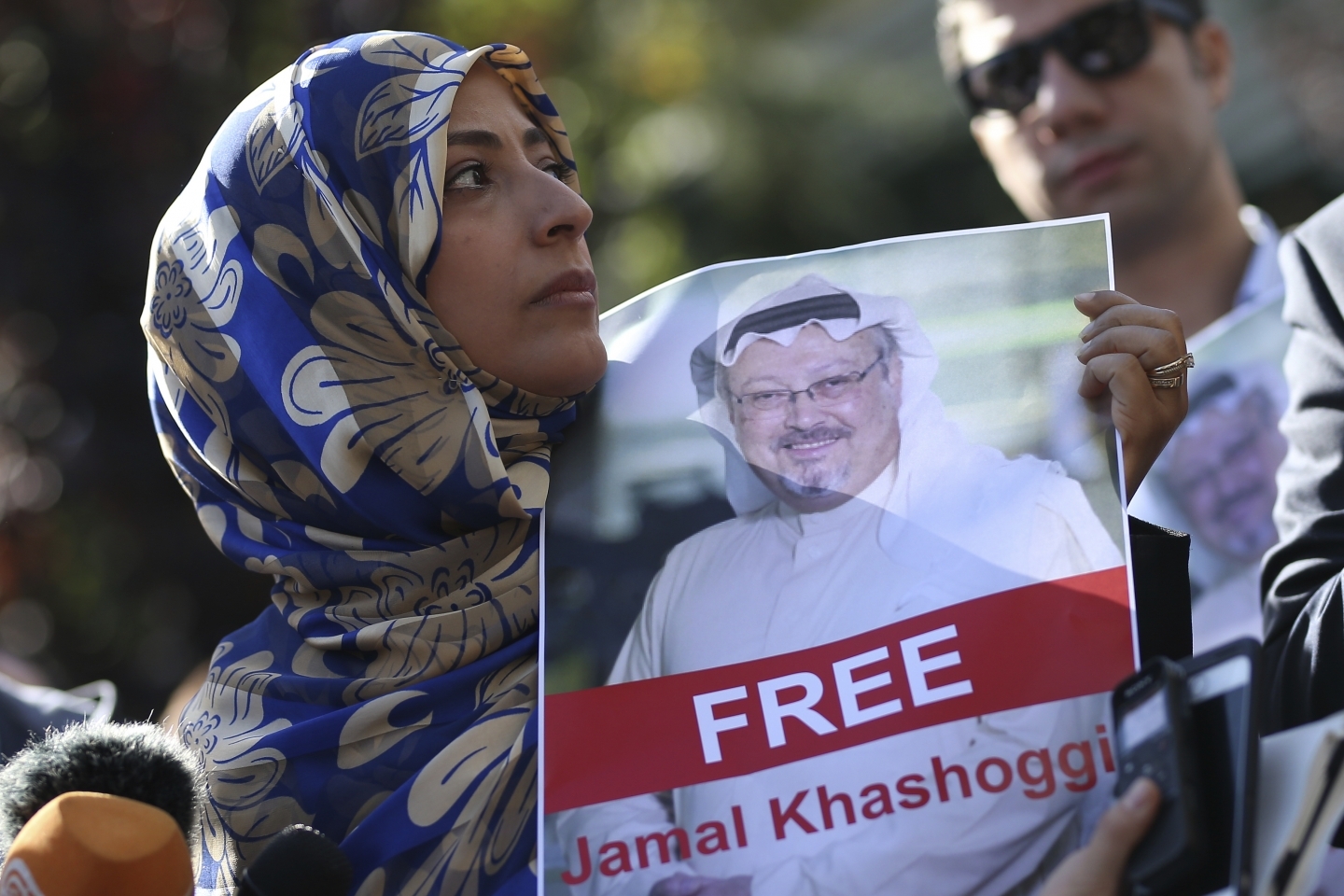 Nobel Peace Prize laureate Tawakkol Karman was among many outside the Saudi Arabia consulate in Turkey seeking answers about the disappearance of Saudi journalist Jamal Khashoggi. (AP Photo/Emrah Gurel, File)

Saudi journalist Jamal Khashoggi may not have been a household name, but his disappearance or presumed murder will be a permanent stain on his government’s assertions that it’s promoting social and economic reforms. The mystery surrounding his disappearance or death get murkier with each passing day, in part because of the geopolitical intrigue and triangle of potential state actors who have their fingerprints all over the fateful October 2 day that Khashoggi disappeared into the Saudi consulate in the Turkish capital of Istanbul.

Well-known in international media circles, Khashoggi went into the Saudi consulate to obtain a certificate of his divorce from his estranged Saudi wife so that he may marry his Turkish fiancée. Waiting outside the consulate for him, his fiancée alerted authorities after he did not come out of the building hours later. The Turks have maintained that there is no evidence of Khashoggi leaving the building, while the Saudis say that he left and it is the Turks' responsibility to explain what happened to one of their citizens on the streets of Istanbul.

It certainly does not help the investigation that the optics of this being a politically inspired disappearance is further complicated when Turkey has a warm relationship and alliance with Qatar, the neighbouring Gulf country on which the Saudis have declared an all-out cold war. Turkey has been coy and giving conflicting statements about what they believed to have happened to Khashoggi and certainly Turkey’s own bleak record of mistreatment and jailing of its journalists is being used by Saudi authorities to pour added doubt on the case.

Nevertheless, the only state actor that has an interest in Khashoggi’s silence is Saudi Arabia, lending credence to the widely held belief that some state security forces were behind his disappearance — if not his fateful death.

Khashoggi has been writing some of the highest-profile editorials that critiqued the reform policy efforts of Saudi Crown Prince Mohammed bin Salman (known as MBS). Using the Washington Post platform, Khashoggi took the risky step of publicly calling out his government’s continued policy blunders from the disastrous war in Yemen, the jailing of Saudi royals and business people in the Riyadh Ritz Carlton nearly a year ago, the imprisonment of Saudi activists, from women’s rights defenders to poets and intellectuals, to the overreaction to Canada’s tweet supporting jailed Saudi human-rights activists. Khashoggi’s articles were also being featured in Arabic, a new and bold move of the Washington Post to influence Middle East politics and speak directly to its people.

As a former government insider who was close to the royal family and inner political elite, Khashoggi could have remained silent, like so many of his colleagues, and toe the party line that the new Saudi Arabia under the de facto reign of MBS was undergoing an enormous transformation for the better.

Indeed, MBS is bringing rapid and welcomed change to the country by loosening archaic guardianship laws that prevented women from working and from driving, by diminishing the sprawling royal family dependency on government coffers, and by instilling a positive work ethic in its young population after decades of institutionalized and generous state welfare. Notwithstanding these positive social and economic reforms is the political costs of an emboldened Crown Prince who leaves no room for debate, critical thinking, or activism of its young and increasingly educated and cosmopolitan society.

As Khashoggi himself articulated in a widely circulated video interview, he does not see himself as a dissident or a member of an opposition. He notes that he is a patriot who loves his country and would have likely agreed and supported many of the social and economic reforms promoted by the Crown Prince, but he could not stay silent to the massive muzzling of free-thinking Saudis that serves to keep the spotlight on MBS as the sole giver of reforms. Saudis are not permitted to champion or intellectually argue for reform, they are only takers of change granted from the megalomaniac, brash Crown Prince.

Thousands are in prison, because like Khashoggi, they could not in good conscience turn off their natural inclination to speak truth to power. Until he reappears, either dead or alive, the mystery will continue and will certainly take on strong geopolitical overtones as each state blames each other. But Saudi and Arab dissidents worldwide are taking note that by raising their voice, they will by silenced.

Nevertheless, the only state actor that has an interest in Mr. Khashoggi’s silence is Saudi Arabia, lending credence to the widely held belief that some state security forces were behind his disappearance — if not his fateful death.
The opinions expressed in this article/multimedia are those of the author(s) and do not necessarily reflect the views of CIGI or its Board of Directors.