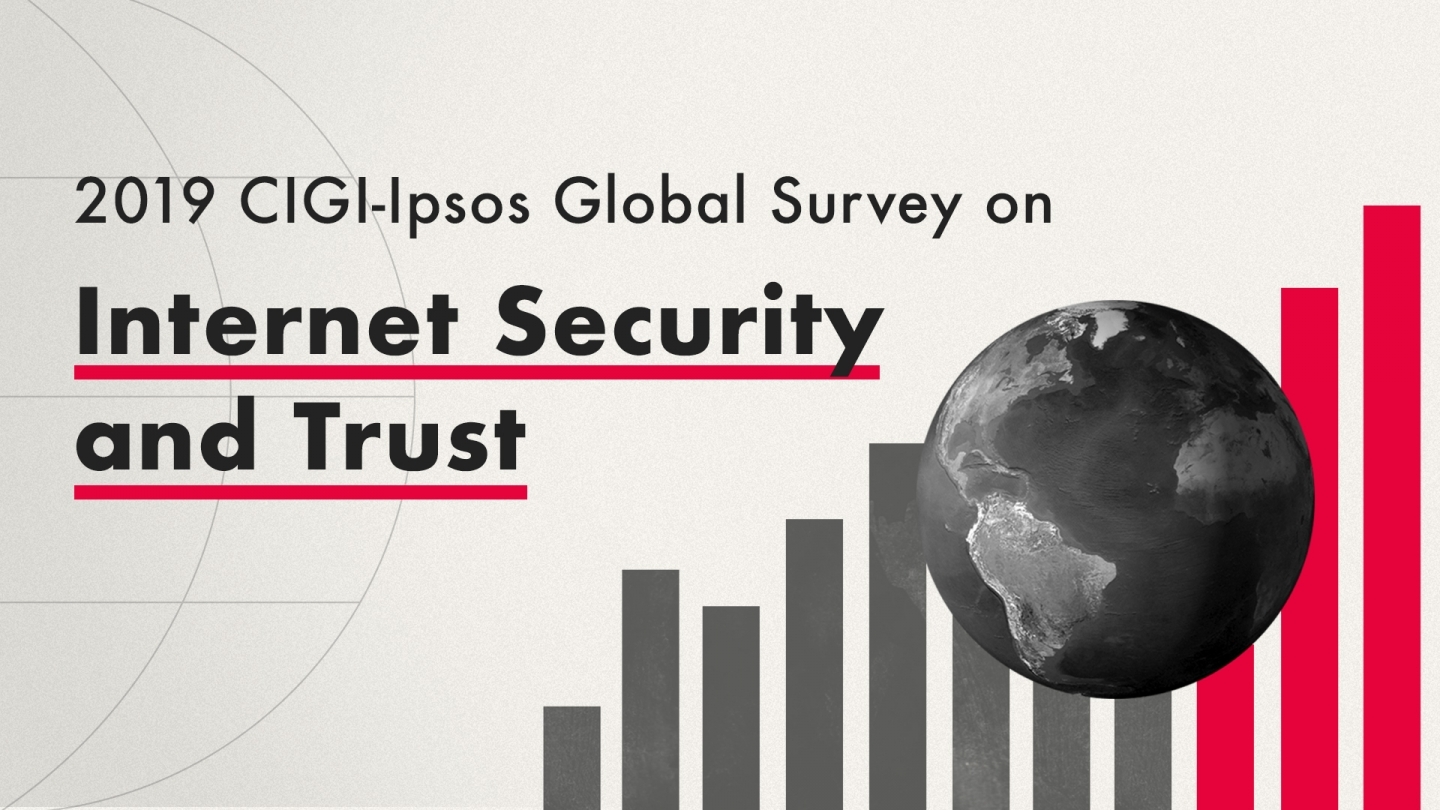 June 11, 2019 (WATERLOO, CANADA) — In a new survey of internet users around the globe, social media companies emerged as the leading source of user distrust in the internet — surpassed only by cyber criminals — with 75% of those surveyed who distrust the internet citing Facebook, Twitter and other social media platforms as contributing to their lack of trust.

While cyber criminals, cited by 81% of those who distrust the internet, remained the leading source of distrust, a majority in all regions (62% globally) indicated that a lack of internet security was also a critical factor.

These and other findings were released today as part of the 2019 CIGI-Ipsos Global Survey on Internet Security and Trust, conducted by Ipsos on behalf of the Centre for International Governance Innovation (CIGI), in partnership with the Internet Society (ISOC) and the United Nations Conference on Trade and Development (UNCTAD).

The CIGI-Ipsos Global Survey, now in its fifth year, is the world’s largest and most comprehensive survey of internet security and trust, involving more than 25,000 internet users in over two dozen countries across North America, Latin America, Europe, the Middle East, Africa and the Asia-Pacific region.

“This year’s survey of global attitudes not only underscores the fragility of the internet, but also netizens’ growing discomfort with social media and the power these corporations wield over their daily lives,” said Fen Osler Hampson, a distinguished fellow at CIGI and director of its Global Security & Politics program.

In terms of the effects of user distrust, nearly half (49%) of those surveyed who distrust the internet said their distrust had caused them to disclose less personal information online, while 40% reported taking greater care to secure their devices and 39% said they were using the internet more selectively. Conversely, only a small percentage of people reported making use of more sophisticated tools — such as using more encryption (19%) or using technical tools like Tor (The Onion Router) or virtual private networks (VPNs) (12%) — to protect themselves online.

“The survey results tell us that people around the world are increasingly concerned about their privacy and security online,” said Sally Wentworth, vice president of Global Policy Development for the Internet Society. “However, we also see that users aren’t utilizing tools like encryption that can help secure their communications. From keeping messages private to protecting critical infrastructure, encryption is an essential tool for digital security. It’s clear that there is more we can be doing as a community to make it easier for Internet users to secure their communications.”

In addition, a digital divide was evident between the world’s developed and developing economies when it came to cryptocurrencies and other new internet frontiers, with those surveyed in Latin America and the BRICS (Brazil, Russia, India, China, South Africa) nearly four times as likely to use or purchase cryptocurrencies within the next year as those in North America, Europe and the G-8.

“Knowledge is power. It’s also a datapoint,” said Shamika N. Sirimanne, director of UNCTAD’s Division on Technology and Logistics. “The CIGI-Ipsos Survey provides us with compelling evidence to help make decisions, shape policy and channel resources to reduce the digital divide in a way that is safe and still creates opportunities for development. We need more trust if the digital economy is to become a viable development tool for developing nations.”

Additional highlights of the 2019 CIGI-Ipsos Global Survey include:

To view the full results of the 2019 CIGI-Ipsos Global Survey as well as those of past years, please visit www.cigionline.org/internet-survey-2019.

About the Centre for International Governance Innovation (CIGI)
We are the Centre for International Governance Innovation: an independent, non-partisan think tank with an objective and uniquely global perspective. Our research, opinions and public voice make a difference in today’s world by bringing clarity and innovative thinking to global policy making. By working across disciplines and in partnership with the best peers and experts, we are the benchmark for influential research and trusted analysis. cigionline.org

About Ipsos
Ipsos is an independent market research company controlled and managed by research professionals. Founded in France in 1975, Ipsos has grown into a worldwide research group with a strong presence in all key markets. Ipsos ranks third in the global research industry. With offices in 89 countries, Ipsos delivers insightful expertise across five research specializations: brand, advertising and media, customer loyalty, marketing, public affairs research, and survey management. ipsos.com

“This year’s survey of global attitudes not only underscores the fragility of the internet, but also netizens’ growing discomfort with social media and the power these corporations wield over their daily lives.” — Fen Osler Hampson
The opinions expressed in this article/multimedia are those of the author(s) and do not necessarily reflect the views of CIGI or its Board of Directors.