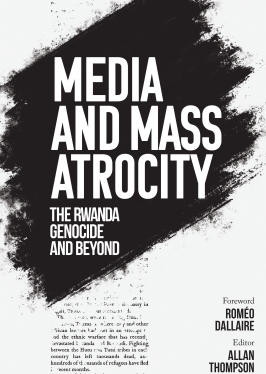 CIGI Press books are distributed by McGill-Queen’s University Press (mqup.ca) and can be found in better bookstores and through online book retailers.

It will have been 25 years since the Rwanda genocide in spring 2019. As more information about the Rwanda genocide becomes available and as the narrative of those events continues to evolve, there is still much to learn from the case study of Rwanda about the role of media in stimulating and responding to mass atrocities. In an era of social media saturation, near-ubiquitous mobile device penetration and dramatic shifts in traditional news media, it is more important than ever to examine the nexus between media and mass atrocity. Advances in information and communications technology have reshaped the media landscape, rendering mass atrocities in distant countries more immediate and harder to ignore. And yet, a cohesive international response to mass atrocities has been elusive. Social media tools can be used to inform and engage, but — in an echo of hate radio in Rwanda — can also be used to demonize opponents and mobilize extremism. With enhanced and relatively inexpensive communications technologies, ordinary citizens around the globe can capture live footage of human rights abuses before journalists have the chance, making social media itself a global actor, affecting the responses of national governments and international organizations to threats against peace and security and human rights. And yet, despite the extended reach that technological advances have afforded traditional news media and social media, the media impact in mass atrocity events is still a complex subject. Specifically, we are left with many troubling questions, still unresolved despite the passage of time since Rwanda. What role do media play in alerting the international community to looming mass atrocity? Could more informed and comprehensive coverage of mass atrocities mitigate or even halt the killing by sparking an international outcry? How do we assess the impact of hate media reporting in a killing spree? What is the role of the media in trying to encourage amelioration of the conflict or post-conflict reconciliation? What do the lessons of Rwanda mean now, in an age of communications so dramatically influenced by social media? Media and Mass Atrocity: The Rwanda Genocide and Beyond grapples with these questions.