Toward A Global Investment Governance Framework: An Opportunity for the Chinese Presidency of the G20

Cross-border investment is an increasingly important part of the global economy. In the last two decades, foreign direct investment (FDI) inflow has grown from about 10 percent to 35 percent of the global GDP (see Figure 1). However, the governance of international investment remains highly fragmented and contested. Unlike international trade, which has been governed by a global framework since the end of World War II — first under the General Agreement on Tariffs and Trade (GATT) and then the World Trade Organization (WTO) — FDI has been governed by nearly 3,000 bilateral investment treaties (BITs) and over 300 other international investment agreements.

Figure 1: FDI in the Global Economy 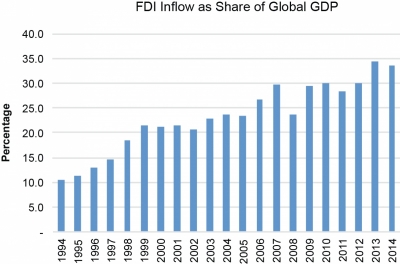 The fragmented nature of FDI governance is problematic. Although many BITs and regional investment agreements share common principles, they differ significantly enough to create legal and regulatory obstacles for investors, especially small- and medium-sized enterprises seeking to make investments abroad. For instance, the European and the American BIT models diverge on whether the national treatment of foreign investors, i.e., equal treatment of foreign investors and local investors in like circumstances, extends to the pre-establishment stage. BITs also vary in how permissive they are toward international arbitration in settling investment disputes. The complexity and incoherence of investment rules increase the transaction costs of international capital flow, weakening an important force for efficiency, competition and global economic growth.

Conversely, for large multinational corporations with sufficient expertise and/or financial resources to handle the complexity and incoherence of investment rules in different parts of the world, the fragmented investment governance framework offers an opportunity for regulatory arbitrage. There have been more than a few cases where powerful companies engage in treaty and forum shopping in order to maximize their chances to win compensation from host state governments for claimed damages to their commercial interests. This is increasingly perceived by some groups as undermining the authority of host state governments, their policy effectiveness and the well-being of the societies involved.

There have been various attempts in the past to create a global framework to govern FDI — most notably, in the 1990s the Organisation for Economic Co-operation and Development drafted a multilateral agreement on investment. Later it abandoned the effort in the face of strong opposition from civil society groups and developing countries. Around the same time, the Uruguay Round of GATT negotiations adopted the Agreement on Trade-Related Investment Measures, Agreement on Trade-Related Aspects of Intellectual Property Rights and General Agreement on Trade in Services as components of the newly created WTO framework. The WTO also set up a working group to tackle trade and investment as part of the so-called “Singapore Issues,” but a lack of consensus among member countries led to the exclusion of this issue from the Doha Round of negotiations that began in 2001.

A major obstacle for the creation of a global investment framework has been the divide between the Global North and the Global South. Until recently, most FDI flowed from developed countries to developing countries (see Figure 2). Northern countries were keen to use international agreements to liberalize the investment environment in southern countries and to protect the rights and interests of their own companies investing abroad. Developing countries found such provisions to be potentially threatening to their sovereignty and policy autonomy, and constraining in their ability to use foreign capital for local economic development. The vastly different positions held by the two sides made it very difficult to reach a global agreement.

However, the world economy has changed dramatically in the last decade. The rise of China and other emerging economies has meant that the flow of FDI is no longer a one-way street from the North to the South. A number of developing countries have begun to export large sums of FDI. The South as a whole is becoming more important as a source of FDI outflow (see Figure 2). In this new context, countries are changing their perspectives on international investment governance. The clear and stable fault lines of the past are becoming more fluid and crosscutting. This creates an opportunity for developing a more coherent global framework for investment governance.

No country is as favourably positioned as China in fostering this potential governance reform. On the one hand, it continues to be one of the top recipient countries of FDI, a position it has held since the early 1990s. On the other hand, since 2012, China has been the third-largest source country of FDI (after the United States and Japan). As a host country of massive FDI inflow, China is eager to safeguard its domestic economic interests and policy autonomy. At the same time, the rapid expansion of China’s FDI outflow has made it recognize the importance of a transparent, friendly and safe investment environment for Chinese companies operating abroad. A brief review of China’s BITs suggests it has evolved from a firm defendant of host-country interests to a potential bridge between different sides in the debate over how to govern cross-border investment.

Having signed its first investment agreement with Sweden in 1982, China now has the second-largest number of BITs in the world (130 as of 2014), after Germany. The first generation of BITs, signed by China before 1998, offered limited protection for foreign investors while preserving substantial policy discretion for the host government. These BITs seldom granted national treatment to foreign investors and, instead, often granted the less demanding most-favoured-nation (MFN) treatment. They allowed the host government to impose performance requirements on foreign investors with regard to technology transfer, local content and exports. The second generation of BITs, signed by China after 1998, provided much stronger protection for foreign investors. Many of these BITs granted FDI national treatment. Moreover, China modified its domestic regulation to meet its commitment of national treatment, removing both sub- and supernational treatment of FDI. In this regard, Chinese investment treaties became quite similar to standard European treaties. Since the mid-2000s, China has launched a third generation of BITs, which seek to better balance the protection of foreign investors with safeguarding policy autonomy in the host country. On the one hand, these BITs have introduced absolute treatment standards, such as “fair and equitable” treatment or a minimum standard of treatment according to customary international law. They also often extend MFN treatment to the pre-establishment stage. On the other hand, these BITs allow the host government to restrict investment flows in the event of serious macroeconomic difficulties.

In addition to the treatment of foreign investors, another crucial issue in the governance of FDI is the settlement of investment disputes. In its first generation of BITs, China either did not include provisions about investment-related disputes or required foreign investors to rely primarily on local dispute settlement mechanisms, such as mediation, arbitration and litigation through the domestic judicial system. International arbitration was of limited use and primarily about the amount of compensation in the case of expropriation. China’s second generation of BITs included broader access to international arbitration. Although China became a member of the International Centre for Settlement of Investment Disputes (ICSID) in 1993, it was not until 1998 that China began to fully accept ICSID arbitration in its BITs. Many new BITs and re-negotiated BITs stipulated access to ICSID and other international arbitration mechanisms on a wide range of investment-related issues. The most recent BITs tend to provide more liberal access to international arbitration, but they use a narrower definition of “investment” and a narrower scope of “fair and equitable” treatment, thereby widening the policy space for the host country.

China occupies a special position in the world economy as a developing country and major importer of capital, as well as the second-largest economy and a growing source of capital export. The evolution of China’s approach to FDI governance shows that it is seeking to balance the different interests and concerns of both sides of the equation. It has shown a much more liberal attitude toward the treatment of foreign capital than many other developing countries. Among the so-called BASIC countries (Brazil, South Africa, India and China), China stands out with its enthusiasm toward BITs and international arbitration. It seems to have gone even further than some of the developed countries in accepting the principle of investor-state dispute settlement. Meanwhile, the Chinese government maintains a strong desire to control the country’s economy and protect key domestic industries from foreign capital. As China assumes the presidency of the G20 — the most important platform for economic cooperation among major countries in the North and South — it has a rare opportunity to push for collective new thinking on how to establish a less fragmented and more coherent global framework for investment governance that balances the interests of different stakeholders.

The author would like to thank Miles Kahler and Patricia Goff for their discussion of some of the issues in this article.

A major obstacle for the creation of a global investment framework has been the divide between the Global North and the Global South.

CIGI experts offer commentary and analysis in advance of the G20 summit to be held in Antalya, Turkey from November 15-16, 2015