I have been asked to speak on US-China relations, where those relations place us in terms of the general future of global economic governance — and, more specifically, the future of global digital governance — given the reality of the Chinese and the Americans as the two giant elephants in the global living room.

Looking first at US relations with China, in several hours’ time we have the Biden-Xi summit. Of itself, this is not insignificant. There has not been a true summit meeting between the two countries for about four years.

The last summit, in Beijing, occurred under Donald Trump. That great marketeer used what he called the “summit+,” the “super summit,” the “summit with bells and whistles on it” to launch the trade war against China. The trade war continued through 2018 and 2019. We then had an interim truce with the signing of the phase one trade agreement between China and the US at the White House in January of 2020 — which I remember attending myself as a member of the audience in the West Wing.

That, of course, was just as COVID-19 was breaking out in China and across the world — which then determined the geopolitics of 2020. The pre-existing trade frictions between the two countries compounded the public health dimensions of what the Americans described as the “Wuhan virus,” the “China virus” or (in President Trump’s inimitable gift of Shakespearean English) the “China plague.”

This intemperate language caused what was left of the US-China relationship to spiral completely out of control; and that breakdown of relations, for a whole range of reasons, continued following the change of administration in the United States. Despite more temperate language, right up to this autumn, the content and the structure of the US-China relationship did not really change from the point it had reached at the end of the Trump administration.

This lack of progress was evident in two successive sets of meetings between senior officials — first in Anchorage, Alaska, and more recently in Switzerland between Yang Jiechi (chief foreign policy advisor to President Xi) and Jake Sullivan (Biden’s national security advisor). In terms both of their optics service and of their content, these meetings failed to contribute to anything that could be described as a normalization of the overall relationship. However, it appears that both (and, in particular, the Yang/Sullivan meeting) did at least pave the way to the inaugural, virtual summit between Xi and Biden.

This takes us to the question: in light of the “surprise agreement” between John Kerry and Xie Zhenhua, and of the Xi/Biden summit, how much can we discern from the tea leaves about what both sides want, about what is likely over time to be agreed, and about what that means for the rest of us as third parties wrestling with the challenges of global governance in the ensuing period?

My operating assumption, from our discussions both in Washington and in Beijing, is that each side has concluded that it is not in their national interest to preside over a further qualitative decline in the bilateral relationship. Each side appears to believe that it is important for this relationship (both at the level of internal politics and at the level of international diplomacy) to bottom out, rather than continuing to spiral downwards. And there is a specific reason for this — namely, that neither side wants to be presented with an environment that becomes unmanageable either politically or bilaterally if they encounter a crisis, either through a collision of ships in the South China Sea, a collision of aircraft somewhere in the Taiwan Straits or in the East China Sea between the Japanese and the Chinese, or through any other clash in either cyberspace or physical space.

So, what do I interpret as the likely direction of travel? Certainly not a return to any status quo ante bellum in the US-China relationship.

Given the present position on both sides, after four years of antagonism, it will be enormously difficult to re-establish an effective bilateral mechanism for managing the relationship in order to prevent it from spiralling further. The domestic politics both in Beijing and in Washington don’t readily admit that. Therefore, I am not optimistic that we’re going to see any significant bilateral structural initiative at this stage. But there is a constituency to stabilize — and that I think is not a bad outcome. A second good outcome would be to establish the beginnings of progress towards a framework of the kind that I have described in the public literature on this subject for the last several years — namely, a doctrine of managed strategic competition.

The two sides may not use that term. The Chinese do not want to refer to “competition,” because it is a fundamental assault on their concept of “win-win cooperation,” and it is also a fundamental assault on their domestic propaganda that China is out to solve the world’s problems — and not to be competed against by the rest of the world in dealing with those problems. Of course, the US administration, and in particular the United States Congress, have a radically different view. They have already concluded that we’re in the midst of strategic competition; and I think, objectively, that is the case. 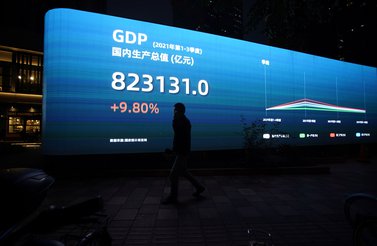 But what we are likely to see, I think, is the emergence of new guardrails in the relationship — mechanisms which can exist bilaterally, to prevent the relationship from falling off the side of a cliff either through miscommunication or misadventure. Also, having identified those guardrails to prevent crisis, escalation and conflict, the two sides may perhaps begin to identify areas of potential collaboration, which brings us into the space that this conference is seeking to deal with.

What those areas of cooperation might be in the future remains uncertain. Obviously, we have seen coming out of Glasgow the joint statement by Xie Zhenhua and John Kerry. We have yet to see where that may lead; but the reconstitution of the US-China climate working group, which was established during the Obama administration and was killed by the Trump administration, provides one example of a really important piece of machinery which is now being rescued. If you look at its working agenda on areas such as methane, on which the Chinese haven’t signed up to a global agreement, we may see advances bilaterally with the Americans. Likewise, there are substantive areas of potential work on deforestation and reforestation, carbon sinks, and “technology standards” (which is code for vehicle emission standards and electric vehicles).

It is much more difficult to forecast what the rest of the collaborative agenda may look like, beyond climate change. Salvaging climate change from the jaws of bilateral political death has been difficult enough. My own think tank, the Asia Society Policy Institute, has been working on 1.5 track diplomacy between the Democrats and the Chinese climate change policy community for the last two years; and we’re pleased about the fact that we have been able to contribute to that. But, given the political dynamics, it’s going to be very difficult at this stage to extract other elements of collaboration.

The next and most obvious candidate, if one is looking at the global governance machinery which needs to be constructed, is of course pandemic management — given that there’s been a spectacular failure of global governance so far in the management of the pandemic, since its first eruption at the beginning of 2020 through to the fact that, rather than producing a new global public good in global collaboration, vaccination became an exercise in geopolitical competition and national one-upmanship. So, the opening question for both administrations is how to handle the next iteration of the virus, whatever that iteration might be. Let’s hope that the sequel to the Biden-Xi summit will move us in the direction of collaboration on that topic.

This leads us to the question of whether the two sides will be able, any time soon, to find a means of collaborating on digital governance. Right now, I see limited prospects of achieving any serious level of convergence between the Chinese and American systems in this area. Digital services are seen currently in both Washington and Beijing as an area of full throttle strategic competition — not just in terms of what we might call the objective technology stakes, nor even just in terms of who achieves “technological dominance” (which is what China’s national industrial plans are designed to achieve), but also in terms of national digital security for both sides.

And so, when I look at the daggers drawn in the technology race between the two countries — right across the range of digital technologies and innovation — and, within that, the primal competition now under way in terms of the future of semiconductors, I am driven to the conclusion that this is currently getting worse, not better.

The final point I want to make in relation to the digital space is that there are fundamentally differing views on the architecture of global digital governance. The group of scholars and analysts and practitioners gathered at this conference will already be well aware of these different approaches: the Chinese state-centric model, the European citizen-centric model and the American corporate-centric model. So, there is a difficult dialogue, of a transatlantic nature, even before you get to the Trans-Pacific dialogue with the Chinese. But, when one does get to that Trans-Pacific dialogue, there’s a central item of contention. The Chinese are determined to export their domestic digital governance standards and their preferred digital governance model around the world. They will seek to work with their Belt and Road Initiative partners to build a global constituency for state-centric global digital governance models; and, of course, the Europeans and the US will be working in different directions on that. So the prospects for any level of convergence on global digital governance at this stage are, in my view, poor.