July 2021 marks the twentieth anniversary of the Centre for International Governance Innovation (CIGI). CIGI’s story began in 2001, when Research In Motion co-CEO Jim Balsillie, along with other partners such as the Government of Canada, created the organization headquartered in Waterloo, Ontario. Together with the help of the Government of Ontario, they laid the framework for an institution tasked with helping solve the world’s most pressing challenges.

Early on, CIGI’s proposals for innovation at the Group of Eight led to the creation of the Group of Twenty (G20). While producing a wealth of rigorous analytical research on a range of international governance issues, CIGI addressed the urgent need for the establishment of the G20 as the world’s premier forum for addressing global problems.

Since then, CIGI’s research has evolved from its initial focus on international relations and the global economy to one of the most pressing issues of our time: digital governance. Today, areas of platform and data governance, digital trade, cybersecurity and intellectual property are presenting new and complex challenges. The current international structures were created before computers even existed, and they cannot address digital challenges in isolation — both in terms of geography and impact. Digital-era governance issues are crosscutting, multidisciplinary and intricate. Once again, CIGI finds itself at the forefront, charting a new course forward for international policy makers tasked with keeping up with evolving technologies in the digital sphere.

Jim Balsillie: What we were experiencing at the time, certainly around 2000, is that there was a transformation going on in the world. The institutions of post-World War II were showing their age. They were showing their age very much in representativeness, but they also needed to respond to more contemporary challenges. And, so, those were very much at play in the conception of CIGI.

Rohinton Medhora: In the early years, the main issue there was the fact that we had a world that was still effectively G7 centric, but we knew that the so-called emerging powers — the emerging economies — mattered, and that there had to be some way to bring them into global governance discussions.

John English: The Western world is clearly, relatively, much less significant and important. It will be less so in the future. How do you go through a transition like this without conflict, with where you can have discussion and where you can come out of the end of it, where the world is a better place than it otherwise would be. So, our focus in the period 2004, ’05, ’06 was on “let’s move the G20 from the finance level to the leaders’ level.”

Paul Martin: CIGI played an important role throughout this because what CIGI did is establish relationships with all of the other think tanks within the G20. And, so, what you had is, you had a construct of academics and professional diplomats who were pushing — and the economists — pushing for the same thing.

Bessma Momani: So, the core mandate of CIGI has always been about, you know, improving the global governance system. And that comes with, initially, we talked about institutions. Certainly, we responded to issue areas like the international financial crisis. But the great thing is that we’ve also evolved very much according to the needs of what the gaps are in our understanding.

Jim Balsillie: And, so, the early origins was understanding that the world is changing and it needs to be shaped. But, my goodness, that evolved with the just cascading digital transformation in the ensuing 20 years.

Bessma Momani: I think we’ve embarked on a really interesting subject matter now. We’ve kind of shifted increasingly to the cyber realm, the involvement of tech in society, all things digital, and I think that’s really the future.

Rohinton Medhora: And, so, intangibles and what makes them up, which is data, digital technologies, intellectual property and also things like branding, hugely matter when it comes to wealth creation and its distribution.

Melissa Hathaway: We’re in a place where the free flow of goods, services, data and capital is at risk because of the regulatory and legal frameworks, the different approaches that our countries are taking. And you’re seeing an increased surveillance state, whether it’s the governments surveilling the data, or it’s the corporations collecting and monetizing that data.

Aaron Shull: You can’t divorce that conversation from a conversation about national prosperity, intellectual property, trade, cybersecurity. I mean, this is, they’re all co-mingled now — economic development and economic security. And, so, I would say that our research, what we’re doing is breaking down traditional horizontal policy silos.

Jim Balsillie: CIGI was very shrewd in saying, “This isn’t a vertical, this is a cross-cutting aspect that’s principally shaping just about everything.”

Rohinton Medhora: And, so, this is a fresh area in global governance. We don’t have the institutions and processes to manage the digital era.

Melissa Hathaway: The importance of global governance in this area is, is we really want to realize the benefits of this digital transformation, we want to see our economies grow. And, so, it requires us to start to have more broader dialogue, increase the governance, start to think about new frameworks that are going to be necessary for the digital next few decades.

Aaron Shull: The role of think tanks, in my mind, is going to get, going to be more and more important as we go down this, this road. My hope is that CIGI is sitting at the intersection between universities, the private sector and government, and that we’re advancing the best policy recommendations possible. 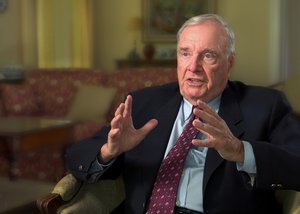