ike other Five Eyes nations, the primary responsibility for countering COVID-19 in Australia lies with its federal and state health authorities — not the country’s national security intelligence enterprise. At the time of writing, Australia’s total COVID-19 case number stands at 7,686, with 104 deaths. Since the first rapid spike in cases (in March 2020), a largely effective and coordinated national public health response in Australia has quickly resulted in a flattened curve to the point that, as of June 2020, case numbers in most states were in the single digits. Several early and effective policy interventions by the Liberal-National conservative government led by Prime Minister Scott Morrison have made an impact on case numbers. These measures included close political coordination through the prime minister’s chairing of a national cabinet that brought in state premiers and chief ministers, and an integrated response by health experts through the Australian Health Protection Principal Committee, chaired by the chief medical officer and including his state and territory counterparts.

As successful as Australia’s response has been so far, the public policy efforts at both the federal and state levels have not been without their challenges. While the primary response to any pandemic resides with health policy makers, epidemiologists, scientists and clinicians, it’s clear that other relevant knowledge and technical capabilities directly relevant to a pandemic’s prevention, disruption, containment and recovery are available in the national security intelligence enterprise.

The relatively newly established (in 2018) Office of National Intelligence (ONI) (formerly known as the Office of National Assessment) no doubt provided the national security committee of cabinet with political assessments on COVID-19 source and potential deception matters. However, since ONI’s establishment, in addition to its all-source assessment function, it has been given an enterprise-management role to better coordinate activities across the 10 agencies in the intelligence community. It’s less clear, though, how ONI exercised this leadership to coordinate a community-wide response to COVID-19.

There is a lot more that Australia’s national security intelligence enterprise, using its vast collection and analytical capabilities, can do to assist public health colleagues.

The Australian Defence Force has provided reconnaissance and contact-tracing teams to help state and territory health authorities as well as scientific technical advice on pandemic modelling. The Australian Signals Directorate also provided specific cyber-threat detection support, in particular for other agencies monitoring cyber scams and online fraud, and provided advice for people working at home. The Australian Border Force has been working closely with state health and policing authorities in managing the return of Australians from overseas and their quarantining and the departure of foreign nationals.

Finally, and perhaps of most interest, is the role the Australian Criminal Intelligence Commission (ACIC) has played. The ACIC is Australia’s federal criminal intelligence body. It collects and assesses strategic and operational intelligence that is used by other federal and state law enforcement agencies to prevent, disrupt and prosecute serious organized criminal activity. The ACIC used its extensive data mining/machine learning capability, including via its Palantir software, to help various public health authorities speed up their contact-tracing efforts. The ACIC’s role in supporting health authorities to contact trace disease clusters is not widely known publicly; however, it is something I alluded to when interviewed by a morning news program on the Australian Broadcasting Corporation about the role of security and policing in managing COVID-19. The ACIC’s analytical capabilities are focused on identifying criminal and terrorist targets rather than a virus, but as suggested in my 2018 book Intelligence, Biosecurity and Bioterrorism, there are many synergies and commonalities between public health epidemiological intelligence and national security intelligence activities.

In summary, to varying degrees, some of the 10 agencies in Australia’s intelligence community have been involved in the country’s “whole of government” response to COVID-19. But in reality, as discussed in Intelligence, Biosecurity and Bioterrorism and more recently in my 2020 article “Improving ‘Five Eyes’ Health Security Intelligence Capabilities: Leadership and Governance Challenges,” there is a lot more that Australia’s national security intelligence enterprise, using its vast collection and analytical capabilities, can do to assist public health colleagues.

What is stopping this deeper, mutually beneficial collaboration between the intelligence and public health communities? There is insufficient space here to provide a comprehensive answer, but in short, there are policy, bureaucratic, legislative and cultural barriers as to why there is not a more systematic and integrated effort to bring national security and public health personnel together to work on threats that are both public health and national security in nature. Not all barriers are immediately surmountable, but in the section below, I provide a discussion of them and a brief policy framework that hopefully can guide how, in the Australian context, barriers can be gradually removed.

At the policy level, pandemics have, for close to two decades, been gradually identified in Australia as a national security issue. However, such rhetoric has not been followed up sufficiently by any high-level political declaration about what specific role the intelligence community should play in the prevention, disruption and management of pandemics. Given the intelligence community has many other priorities (terrorism, foreign interference and the resurgence of China and Russia), it is no surprise the community has not sought to invest bureaucratic bandwidth in making pandemics the kind of national intelligence priority that results in the allocation of significant collection and analytical resources.

A first point for a post-COVID-19 policy framework is for the government and national security intelligence enterprise to move beyond the rhetoric of pandemics being a national security issue to operationalizing these words in a political and bureaucratic sense. There are two initial measures — one strategic, the other operational — that would be useful in improving the intelligence community’s institutional focus on pandemics and other health emergencies. 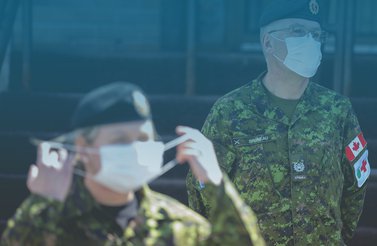 I do not think the ASIO would be a good fit, given it already carries a significant body of work, and in terms of branding as a “spook agency,” it’s likely not a good fit to be the operational interface between the intelligence community and public health officials. I also do not believe the relatively new Department of Home Affairs would be a good choice either, given it has more of a policy-coordination function rather than a well-structured operational intelligence capability to operate in the health security intelligence space.

Given how the ACIC stepped forward during the COVID-19 pandemic to help federal and state health authorities with contact tracing and its own suite of COVID-19-related intelligence assessments, it could be considered for this operational coordinating role. The ACIC already has well-developed coordination roles with both national security and law enforcement agencies that are part of the intelligence community, so it can act as a bridge between the strategic and operational activities of the community in health security. But more importantly, the ACIC has a legislated mandate to provide criminal intelligence to state policing agencies, so it is a trusted commodity, at least at the state law enforcement level. The ACIC could also build on the goodwill it has developed during the COVID-19 pandemic with federal and state public health authorities to support early warning systems and augment public health surveillance activities. Additionally, in parallel with the strategic and operational policy changes suggested, it would be appropriate for Australia’s Parliamentary Joint Committee on Intelligence and Security (PJCIS) and the principal external independent intelligence oversight body, the Inspector General of Intelligence and Security (IGIS), to also monitor the effectiveness of Australia’s intelligence community’s role in managing health security crises in the future. The government has not yet raised publicly this kind of amended role for either the PJCIS or the IGIS, but oversight over how the intelligence community performs against the strategic and operational reforms mentioned would be prudent.

A third barrier is legislation. From a public health perspective, Australia has several pieces of legislation that govern federal responses to a public health emergency. The Biosecurity Act 2015 is the key piece of law that has guided the federal government’s decisions on social distancing, quarantining and even forceful detention of people if warranted. Likewise, the National Health Security Act 2007 and several other public health orders struck by state governments have been relevant in responding to COVID-19. However, these acts do not delineate the role of the national security intelligence community in public health emergencies, nor do key pieces of intelligence legislation such as the Intelligence Services Act 2001. At this point, the government, using the recent outcome of the Richardson Review,1 is looking to reform the large suite of intelligence and counterterrorism legislation that has emerged since September 11. In the context of a major legislative review, now is a good time to clarify the ongoing role of the intelligence community in health security threats and risks, including the appropriate checks and balances.

This brings us to the final barrier: “culture.” It is not just a lack of political and bureaucratic investment in pandemics by the intelligence community that is problematic, but there are also deep cultural currents preventing consistent collaboration between the public health and national security and intelligence sectors. Both are like separate tribes that have, up until very recently, largely talked past each other, neither understanding each other’s perspective and what both can bring to prevent and manage pandemics. National security intelligence agencies have traditionally seen anything vaguely labelled as “health” through the prism of state or non-state actors weaponizing biology (for example, state-sponsored weapons of mass destruction or biological terrorism). The focus is on the threat actor, not the patient.

In contrast, public health authorities naturally are patient-centred and use epidemiological intelligence to prevent and reduce the spread of disease. The focus is not on threat actors but on patients and disease. Yet several global pandemics before COVID-19 (for example, human immunodeficiency virus, severe acute respiratory syndrome, swine flu, Zika and Ebola) are not just regional or global health emergencies but also grave health-security events. Such events not only had the potential to make many sick but their implications globally — in particular for developing countries with fragile public sector infrastructure — had security implications for states involved. The 2014–2016 Ebola outbreak in Western Africa, which killed 10,000 people, illustrates how a major public health emergency not only has catastrophic health outcomes but can also destabilize the capacities of nation-states to respond to such crises. And, of course, COVID-19 now underscores the fragility of even wealthy states’ ability to respond to regional and global health security crises.

So, there is a need to broaden the language used by the health and security communities to better describe how they can work together. Language, in any culture, is a defining instrument of identity, so an important way to develop trusting habits of cooperation and expertise between the public health and national security communities will be to adopt common language that adequately addresses both the intentional and unintentional causes of health emergencies. As suggested in other work, health security provides an overarching label and discipline reference point for both national security intelligence and public health authorities to collaborate more effectively by sharing their complementary knowledge and skill sets.

1The Richardson Review (also known as the Comprehensive Review of the Legal Framework Governing the National Intelligence Community) was established by the Australian government in December 2018. The 2017 Independent Intelligence Review recommended a review of national intelligence legislation, which was led by the former defence secretary and director-general of the ASIO, Dennis Richardson. A public version of the review has not yet been released.