The G20 Can Keep a Candle Lit for Global Cooperation 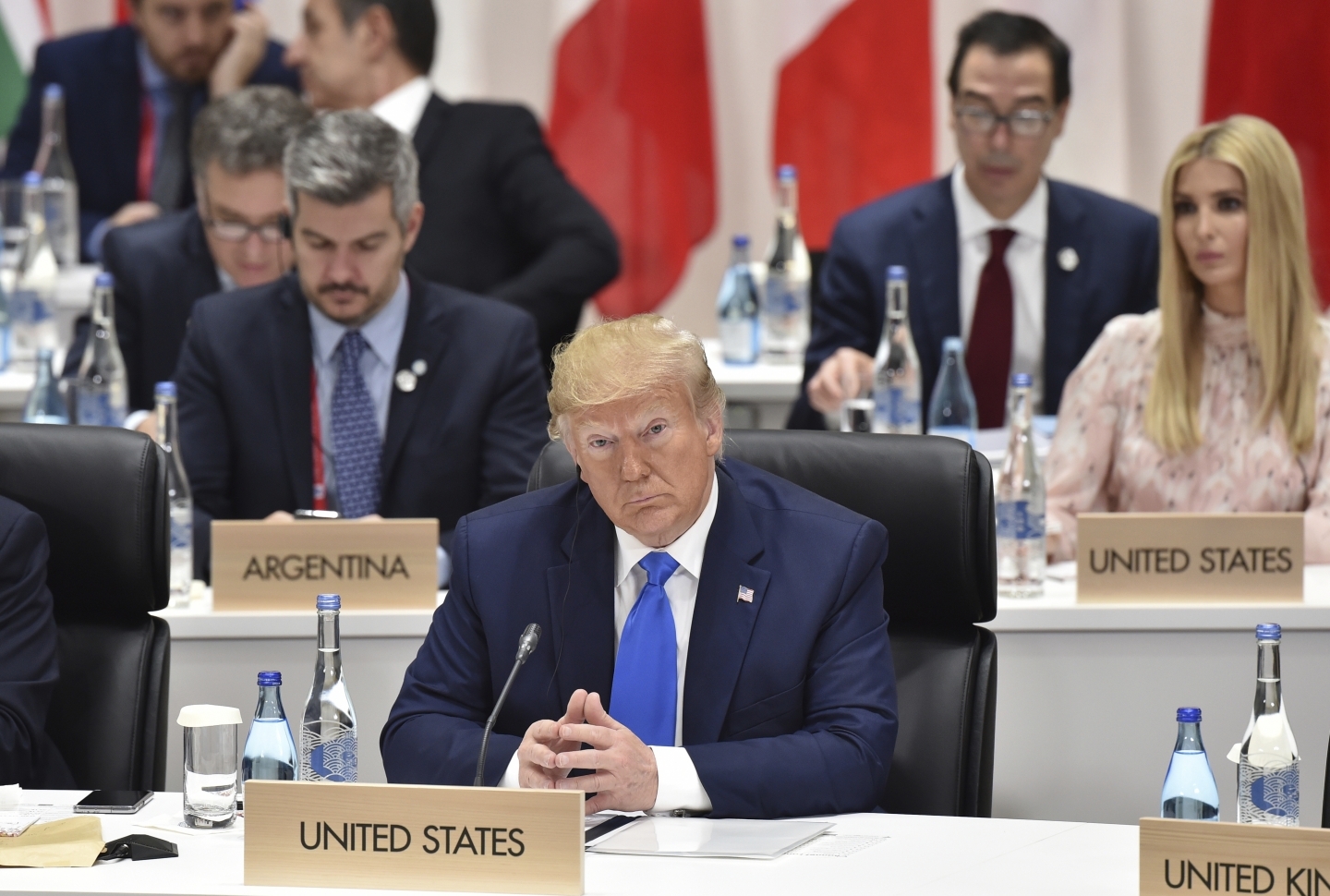 US President Donald Trump attends a session on women's workforce participation, future of work and aging societies at the G20 Summit in Osaka Saturday, June 29, 2019 (Kazuhiro Nogi/Pool Photo via AP)

It’s Donald Trump’s world, and with the possible exception of Xi Jinping, the rest of us are merely living in it.

That’s the only conclusion to draw from the coverage of the Osaka Group of Twenty (G20) Summit, at which the US president reduced an assembly of the world’s most important leaders to a sideshow for his meeting with China’s leader over their trade dispute. Little attention was paid to the actual G20 agenda before, during or after. Trump and Xi negotiated a “truce” that avoids any escalation of the trade war, for now, and China agreed to buy “large amounts” of US farm products, according to Trump. Stock markets rallied, even though tariffs on goods worth hundreds of millions of dollars will remain in place indefinitely.

“Congratulations to Prime Minister Abe of Japan for hosting such a fantastic and well run G-20,” Trump tweeted. “There wasn’t a thing that was missing or a mistake that was made. PERFECT! The people of Japan must be very proud of their Prime Minister.”

When Henry Paulson, the former chief executive of Goldman Sachs Group Inc., joined President George W. Bush’s administration in July 2006 as Treasury secretary, one of the first things he did was create the U.S.-China Strategic Economic Dialogue, envisioned as a regular meeting between leading officials from the two biggest economies. Journalists soon started calling these “G2” meetings. Group of Two, or G2, rolled off the tongue easier than “the SED.” It also nicely described Paulson’s preference for working directly with China rather than engaging through the Group of Seven or the G20, which operated solely as a second-tier forum for finance ministers and central bank governors at the time.

Paulson would eventually turn to the G20 for help in dealing with the financial crisis; Bush convened the first summit in Washington near the end of his presidency in 2008. President Barack Obama hosted the third gathering the following year in Pittsburgh, at which the group appointed itself the premier council for global economic coordination.

Trump has now demonstrated that he sees the G20 as little more than a staging ground for his circus-like approach to international diplomacy.

As Thomas Bernes, a former senior Canadian finance official and a distinguished fellow at the Centre for International Governance Innovation, observed on the eve of the Osaka summit, Trump has sapped the G20 of the energy and cooperative spirit it had at its beginning. Even as it got harder to agree on how to approach the Great Recession’s aftermath, leaders still agreed that they should resist the lure of protectionism. That pledge is now gone at the behest of the Trump administration, which sees tariffs and sanctions as a means to force its will on weaker partners. In Osaka, leaders said in the communiqué that they will “work to ensure a level playing field to foster an enabling business environment.” 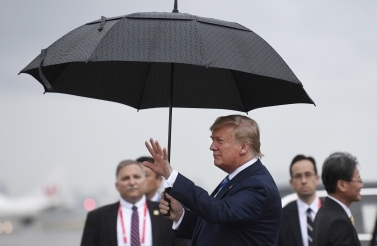 The reaction from internationalists to Trump’s third G20 summit was predictably downbeat. Merriden Varrall, a non-resident fellow at the Lowy Institute, was “underwhelmed.” Shiro Armstrong, director of the Australia-Japan Research Centre at the Australian National University’s Crawford School of Public Policy, wondered if the Osaka summit would be remembered as “the moment the global rules based order was lost.” Bernes noted that if the Trump-Xi agreement was the highlight, then the summit itself should be considered a “substantial failure,” as the rest of the group had nothing to do with it.

Indeed, the communiqué was mostly an uninspired mess of contradictory paragraphs, unreadable jargon and empty commitments. The G20 said global economic growth was “stabilizing,” and then described it as “low” and said that risks were “tilted to the downside.” Leaders were troubled by “trade and geopolitical tensions,” which had “intensified.” Trump, Xi and a handful of other G20 leaders are directly responsible for seeding those tensions and exacerbating uncertainty, but the group had nothing to say about that. “We will continue to address these risks, and stand ready to take further action,” the statement said.

It’s possible that some expect too much of the G20. “Many observers still reminisce about the 2008 financial crisis,” Ludger Schuknecht, deputy secretary-general of the Organisation for Economic Co-operation and Development and former chief economist at Germany’s finance ministry, said before the summit. “But with the crisis over it is perfectly ‘normal’ that macroeconomic action is on the back burner. The current environment is marked by a slowdown and risks, but the situation is very different from 10 years ago.”

The Argentines, who ran the G20 in 2018, described their main job as simply keeping the group together. “There is a very clear vision that we have to keep this group alive and functioning in harmony because it is in bad times when we see how important, how key, this group is,” Nicolás Dujovne, the finance minister, told reporters last year. Summitry is an opportunity to network, compare notes and address sticky bilateral issues between important countries. That has value. And it means that when the next crisis arrives, the biggest economies won’t lose time putting a response team together.

Still, if the goal is to keep the fire trucks shined and ready to go, then interest will wane. The G20 was the creation of Canada’s Paul Martin and the United States’ Lawrence Summers, two of the most respected finance ministers of the 1990s. But it tended to attract mostly junior officials until the financial crisis changed attitudes. Indifference could return. Andrés Manuel López Obrador, Mexico’s president, skipped the Osaka summit for no apparent reason other than a preference to stay at home and prepare for a speech in Mexico City. 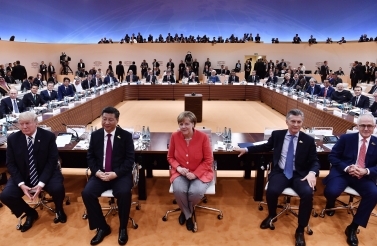 If the G20 sees itself as a crisis committee, it would do well to stop undermining its own credibility by making promises it can’t keep. In Osaka, leaders acknowledged that they will “need to accelerate our efforts” in order to achieve the “Brisbane Goal” of narrowing the gap in labour force participation rates between men and women by 25 percent by 2025. It would be great if they did. At the Brisbane summit in 2014, leaders also pledged to implement policies that would increase their combined GDP by two percent by 2018. They never got close. The G20 just stopped talking about the target, as if it never had been set.

The Osaka communiqué also calls on the Global Forum on Steel Excess Capacity (GFSEC) to reach a consensus on how to further its work by the fall. The G20 created the GFSEC in 2016 to address a glut that was depressing prices and forcing North American and European steel mills to close. The committee achieved little, setting the stage for Trump’s steel-and-aluminum tariffs, which he justified as necessary to protect national security. The GFSEC’s mandate is set to expire in November. There is still a lot of work to do. The global steel market is now beset by a thicket of tariffs and other import barriers erected in response to Trump’s policies. It’s unclear why the G20 thinks it can somehow make a difference now when it couldn’t before. More likely, the steel issue will be decided by the United States and China, since the latter is the biggest source of overproduction and the former has made clear that it prefers to resolve trade issues on its own terms.

The same could be said of the G20’s “support for the necessary reform of the World Trade Organization (WTO) to improve its functions.” Leaders said they “will work constructively with other WTO members,” a pledge belied by the United States’ refusal to approve new judges to the organization’s Appellate Body, crippling the dispute resolution system. The WTO is facing its biggest crisis since its creation, almost entirely because the Trump administration has decided the international order works against US interests.

American belligerence is perhaps the biggest argument in favour of ensuring the G20 remains relevant. There were hints in Osaka about how that could be achieved. To their credit, 19 leaders pledged their full support for the Paris Agreement on climate change, refusing to let Trump’s opposition force an official watering down of their commitment to fight global warming. Leaders could apply this approach to other issues, including trade, rather than allow the Trump administration to force his world view on the global community.

Middle powers could use the G20 as a place to build support for important initiatives, rather than sit back and watch the United States, China and the European Union dictate the debate. Varrall noted that Indonesia led a proactive defence of the multilateral trading system, and Armstrong was impressed by how Australia convinced the G20 to issue a separate statement that called on social media companies to keep content related to terrorism and violent extremism conducive to terrorism off their platforms.

These were small things, but they prove it’s possible to keep a candle lit for global cooperation, even when the Trump circus comes to town. The G20 was created because the world had become too complicated for one nation to run alone — even the United States. The non-American men and women currently in the leaders’ chairs need to be reminded of that. They are meant to be participants, not bystanders.