debate is developing in Canada about who will control and profit from the massive volume of data generated by smart cities in the future. The stakes are high for two reasons: this data holds large financial value and it will have a huge impact on citizen life in cities.

To prepare for this debate, there is an urgency to develop a national policy and strategy on how we treat public data, for three reasons:

Despite the healthy debate taking place, this issue is, disturbingly, out of the spotlight. Sidewalk, which was named by the City of Toronto in the fall of 2017 as an “innovation partner,” is encountering a debate about foreign private interests controlling civic data. On March 5, 2018, the Toronto Star reported: “Waterfront Toronto’s eagerness to sign a deal with a Google sister company has alarmed experts who warn cities are easy prey for Big Tech and its unquenchable thirst for data” (Rider 2018). Canadian news outlets are covering this debate, but if it was focused on the acquisition of a Crown corporation or a prized national park, it would have erupted.

Ownership of public data will impact our lives in known ways, and in many more unknown ways. The boundaries of what Canada is going to say yes to need to be set. If we lose control of this debate, we lose control of a valuable natural resource embedded in our city infrastructure. Policy should start with two simple conditions to protect us: First, city data must be owned by cities. Period. Second, city architecture must be open to ensure cities control their destiny. Period.

Why City Data Is So Valuable

Data has been called the new oil. Why? Because it creates class warfare. Those with it (“the haves”) benefit from its enormous value and, ultimately, control the agenda. Those without it (“the have-nots”) operate at the mercy of those setting the agenda. Data is an asset that creates wealth and power. This is why we need to shine a bright light of public debate on who will own it in Canada.

Historically, data has given those that hold it an operating advantage. It has empowered stronger decisions and created the opportunity for information arbitrage against those who lacked access to data. For example, think of how Netflix used data to create an operational advantage in marketing content to users compared to traditional movie retailers.

Data has been called the new oil. Why? Because it creates class warfare.

This remains true today, but two new forces are emerging that increase the value of data. The first is the view of data as a creator of intellectual property (IP). The emergence of artificial intelligence fundamentally changed the role of data. Instead of data being an output of IP, data is now creating IP. That IP will result in businesses and patents being created. Undoubtedly, many of those innovations will emerge from the private sector. But if cities do not own and control their data, they will not capture any of the benefit.

Consider the data set that emerges from looking at the library check-out habits of citizens at the public library. This data likely holds enormous value, particularly when cross-referenced against past check-outs and demographic information. It is difficult to list all of the possible IP that could be generated from this and other public data sets. But the thought of cities being left out of the value creation process from that data should leave us all feeling uneasy.

The second major force increasing the value of data is its use as a policy tool. As cities become more data driven, data plays an increasing role in determining city policy. Data drives decisions around what roads need repair, where transit routes should go, where school zones are delineated. These are the decisions that affect us every day. We need to question to what degree we are comfortable with those decisions being impacted by data that is owned and controlled by private interests. 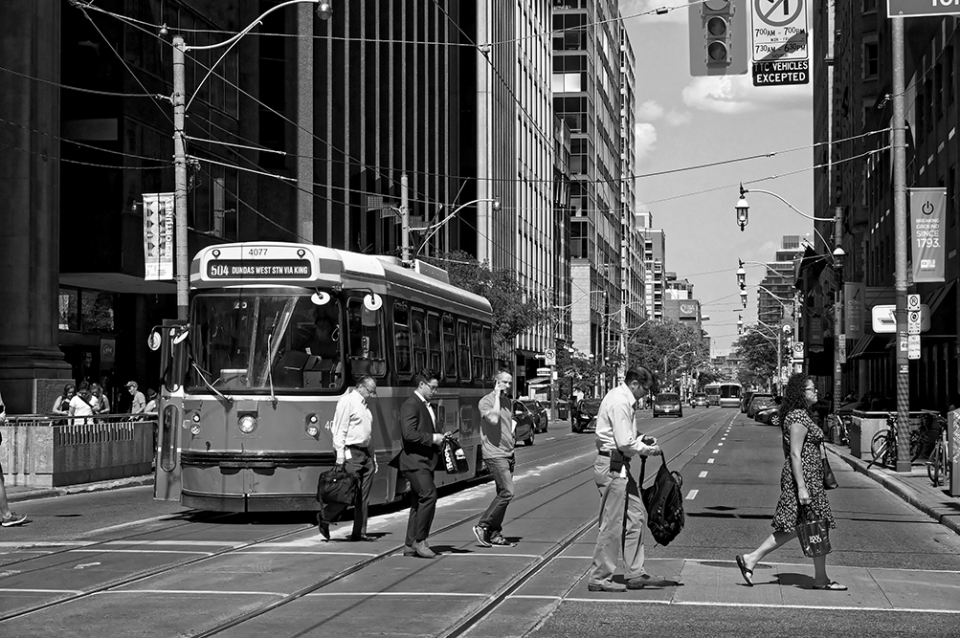 Data is playing an increasing role in determining policy in cities. Decisions about road repairs, transit routes and school zones are all driven by data. (Source: Vadim Rodnev / Shutterstock.com)

The Keys to This Debate

Debating what happens to city data is really about two things. Legal ownership and technical architecture are the two ways that private companies have sought to take control of city data. Data ownership is largely defined by the terms and services of agreements that cities are making with technology vendors. In some cases, such as Sidewalk Toronto, those terms have not been made available for public review, which has caused significant concern for many city councillors and citizens.

The technical aspect of this strategy relates to the access and portability of the data. Technical access is less about legal terms, and more about technology architecture. For decades, private companies attempted to lock cities in to closed architectures and proprietary systems. This was largely done to create vendor “lock-in” and ensure that the company won subsequent procurements since their platform was a closed ecosystem. Closed architecture was key to their business model. However, a side benefit has emerged for these vendors: closed architecture is a powerful mechanism to restrict the ability of cities to access the valuable asset (data) that is trapped inside of the infrastructure they have purchased.

What Cities Need to Do

Every consumer generates hundreds of dollars each year in consumer data, which is given away for free. Companies such as Facebook, Google and Amazon monetize that data and create hundreds of billions of dollars in market capitalization, value that is not shared for the public benefit. If a private sector company builds smart city infrastructure in a city or country that lacks a data strategy with defined standards and governance, the company has the upper hand in monetizing it.

To prevent this from happening, heightened scrutiny and public debate — such as the one sparked by Toronto’s Quayside — about how smart city data will be used and monetized is critical. It will ensure Canada profits from the massive value that will be created in smart cities across the country.

Ultimately, city data is produced by two things: infrastructure, paid for by our tax dollars and by us, and our interaction with that infrastructure. Essentially, the creation of this data is being completely funded by Canadian tax dollars, and now that its enormous value is recognized, we should ensure we own it and can capture the value it is creating.

This is a call to action. Canada must develop a national policy that mandates two things: data ownership and open architecture. The first would work to ensure that the value of data in our cities profits citizens and not private interests, while the latter would establish that all smart cities should be built on an open innovation ecosystem where the public good is paramount. Turning a blind eye to the issues of data ownership is akin to economic colonization, with a transfer of wealth from Canadian cities to private, and more often than not, foreign, interests.

Data Governance in the Digital Age

Rationale of a Data Strategy

The Economics of Data: Implications for the Data-driven Economy

The Government’s Role in Constructing the Data-driven Economy

VIDEO: The Economics of Data: Implications for the Data-driven Economy

The Role of a Data Strategy for Canadian Industries

Treasure of the Commons: Global Leadership through Health Data

VIDEO: Treasure of the Commons: Global Leadership Through Health Data

Data and the Future of Growth: The Need for Strategic Data Policy

Crypto Agility Is a Must-Have for Data Encryption Standards

Measuring the Economy in an Increasingly Digitalized World: Are Statistics Up to the Task?

VIDEO: Governance Vacuums and How Code Is Becoming Law

Data Libera? Canada's Data Strategy and the Law of the Sea

Data Rules in Modern Trade Agreements: Toward Reconciling an Open Internet with Privacy and Security Safeguards

Data Minefield? How AI Is Prodding Governments to Rethink Trade in Data

On the Internet, Everybody Knows You Are a Dog

VIDEO: On the Internet, Everybody Knows You Are a Dog