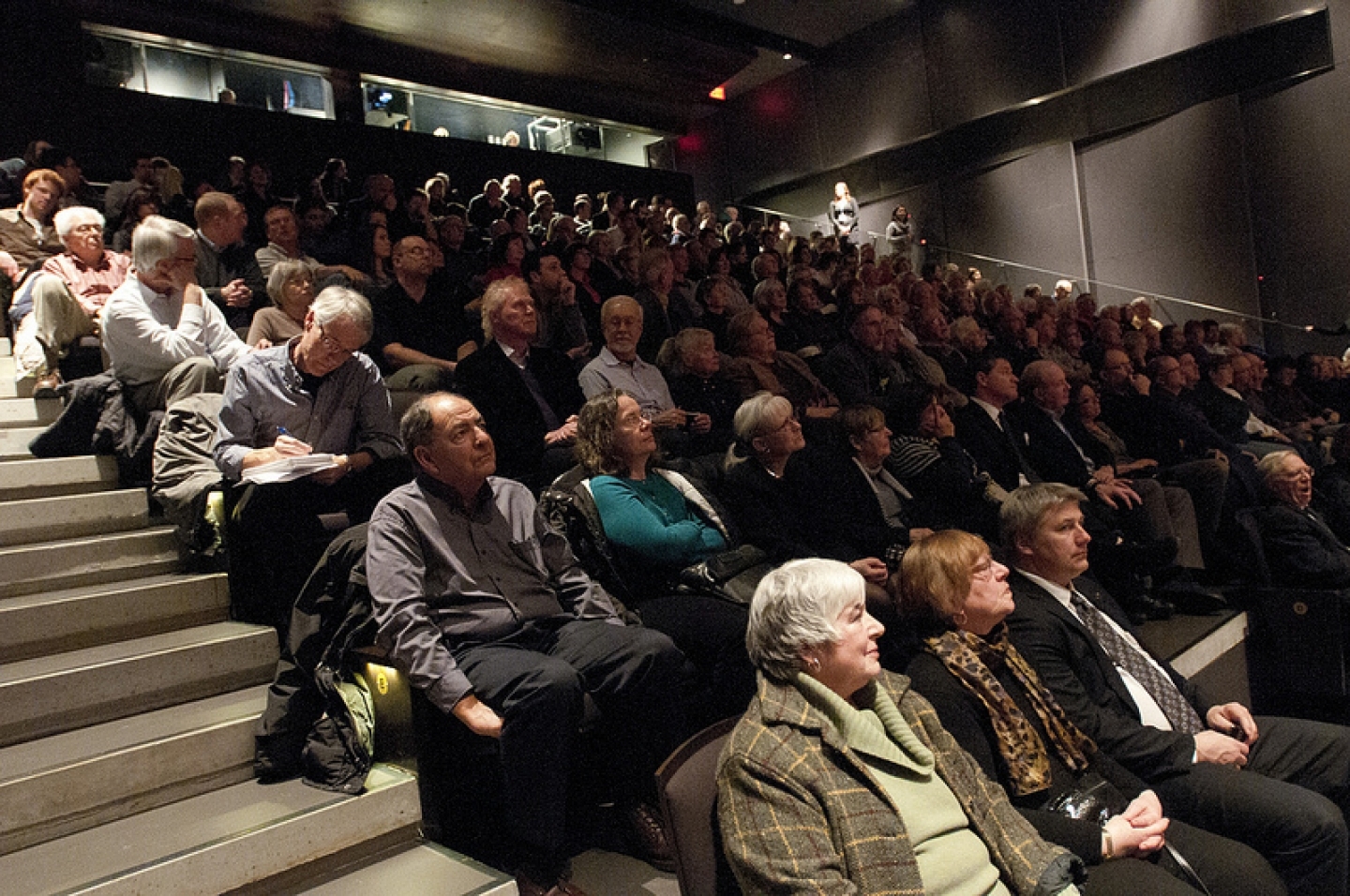 A view of the sold-out CIGI Auditorium at the Signature Lecture Series, April 11, 2012 (CIGI Photo)

Spring is a busy season, bursting with renewal and new energy.  At CIGI, we’ve been engaged in a whirlwind of activity at home and abroad, to advance the agenda on international governance.

In Mexico City, CIGI joined in an April conference called “Strengthening the Financial Sustainability Board.”  The primary objective was to foster a fruitful exchange of ideas among members of the FSB Working Group on Governance and Resources, senior FSB Plenary and G20 members and academic experts.  Co-sponsored by CIGI, Banco de Mexico, Bank of Canada and CIGI, this event was attended by CIGI’s Jim Haley, Director of the Global Economy Program, and Badye Essid, Economist.

In April, we attended — as always — the International Studies Association (ISA) conference, held this year San Diego. It’s among the largest academic conferences in the world, with more than 5,000 scholars delivering research on global affairs.  CIGI Fellows and Chairs presented on a wide range of topics, including emerging powers in climate change negotiations (Kathryn Hochstetler, CIGI Chair of Governance in the Americas) and  Canada’s resource capitalism (Jennifer Clapp, CIGI Chair in Global Environmental Governance).  CIGI co-hosted a networking reception for select ISA attendees with Canada’s Department of Foreign Affairs and International Trade, and maintained a booth in the exhibit hall for interested visitors.

At home in Waterloo, CIGI runs a series of public lectures at our splendid new auditorium. No worries if you live elsewhere: we live-webcast all of these events — you can sign up for free at our online Events page.  And even if you miss the webcast, you can enjoy the events later, by watching the videos we post online.  Some of the recent and upcoming entries in the CIGI Signature Lecture Series:

Lots of other CIGI activity, just around the next corner.  We are participating in the May 26 to June 2 annual Congress of the Canadian Federation for the Humanities and Social Sciences (held conveniently in Waterloo). If you’re in Waterloo for this conference, be sure to visit the CIGI booth.

CIGI will also be attending the G20 Summit in Los Cabos, Mexico, June 17–19.  Our experts will be on site at the International Media Centre, analyzing the event for CIGI’s website, and providing expert commentary and insights to more than 1,000 international media covering the event.

We’ll be present at the annual conference of the Academic Council on the United Nations System (ACUNS) in New York City in June, promoting, among other publications, a new paper by CIGI Distinguished Fellow Louise Frechette on UN peacekeeping.

And we’re planning for a major launch in June (with planned events in Vienna, London, Washington and Waterloo) of a report by CIGI Senior Fellow Trevor Findlay – a culmination of his two-year review of the International Atomic Energy Agency.

Amid all this hustle and bustle, we’re also undergoing a transition in leadership, as outgoing Executive Director Thomas A. Bernes becomes a CIGI Distinguished Fellow, to be succeeded in the executive role by incoming President Rohinton Medhora.

Oh, there’s lots more happening at CIGI.  But this account is in danger of going past decent blogging length.

Suffice to say, it’s the spring rush and CIGI’s in the fast lane. Keep those seatbelts fastened!

At CIGI, we’ve been engaged in a whirlwind of activity at home and abroad, to advance the agenda on international governance.
The opinions expressed in this article/multimedia are those of the author(s) and do not necessarily reflect the views of CIGI or its Board of Directors.