Canada's Two-Step on Pipelines and Climate

Far from needing new pipelines, oil sands operators may have trouble filling the ones they have 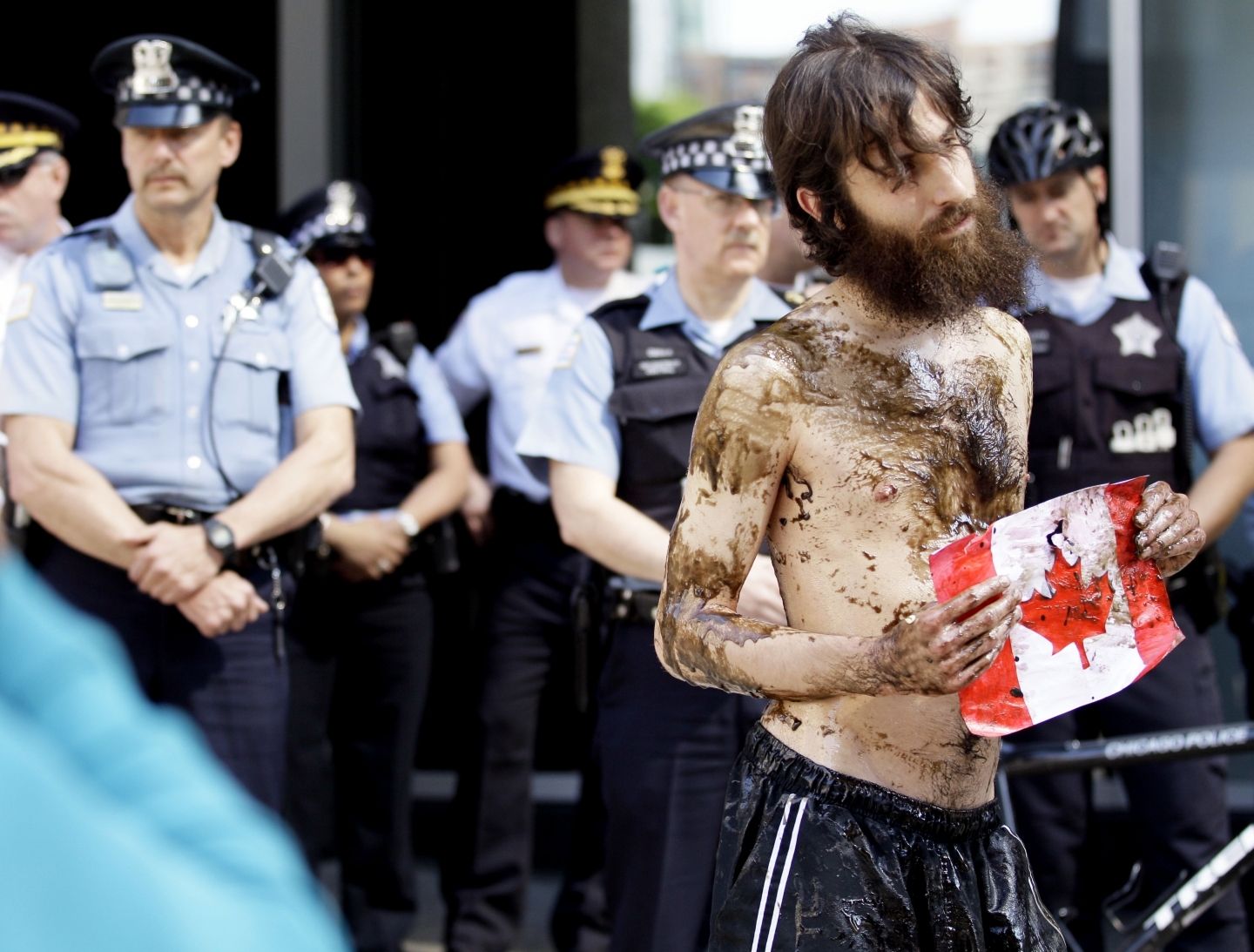 A demonstrator against pipelines at the Canadian Consulate in Chicago (AP Photo/ Nam Y. Huh)

What should investors think of the mixed signals sent by Canadian Prime Minister Justin Trudeau about the oil sands?

With approval of Kinder Morgan’s plan to twin its Trans Mountain pipeline through the Rockies and a green light for Enbridge’s Line 3 pipeline expansion in Alberta, Ottawa still seems to be holding out the promise that the country’s fossil-fuel industries have a future.

Yet at the same time, the government has ratified in Parliament the commitment it made at the United Nations Climate Change Conference (COP21) in Paris to take dramatic steps to reduce carbon emissions that would undermine demand for such fuels, particularly the oil sands’ high-cost bitumen in the very markets sought by new pipelines.

New pipelines have long been championed as the oil sands’ salvation, with producers arguing that tidewater access would unlock the much greater pricing power desperately needed to make their highly discounted fuel economic. Western Canadian Select, the benchmark price for bitumen from the oil sands that is mixed with diluent to move through pipelines, trades at a hefty discount to the global price benchmark Brent or the US benchmark West Texas Intermediate.

But, of course, nowhere in the world does bitumen capture the price of conventional light oil. The oil sands crude is an inferior fuel requiring significantly more upgrading and refining before it can be converted into finished products like gasoline or diesel. And contrary to industry claims for desperately needed new pipelines to tidewater, overseas markets typically pay less for bitumen and other forms of heavy oil than the US Gulf Coast, home to the world’s largest heavy-oil refinery hub.

Comparable heavy-oil grades like Mexico’s Maya crude typically fetch higher prices along the US Gulf Coast than they do from overseas refineries. For example, between January, 2015, and March, 2016, Maya crude prices averaged more than $3 (US) a barrel less in Europe than in the US Gulf Coast and more than $8 a barrel less in the Far East. Why, then, would the same European and Asian markets be expected to pay more for Alberta bitumen than Gulf Coast prices?

Neither Kinder Morgan’s twinning of its Trans Mountain pipeline (which would serve as a conduit to Asian refineries and could still face legal challenges) nor the rejected Northern Gateway pipeline (which would have run from Alberta to the Pacific coast) would likely bring any higher prices for oil sands fuel. Instead, they would only facilitate shipments to foreign markets that have traditionally paid less, not more, than North American refineries. Moreover, with the added Canadian supply that new pipelines could deliver, the price differentials for bitumen and heavy oil between overseas markets and the Gulf Coast could even worsen.

Price differentials aside, the more fundamental issue facing the oil sands is that even if bitumen producers could capture the same world oil prices applicable to light conventional oil, those prices would still leave the bulk of their current production and virtually all planned increases in oil-sands production uneconomic. For the oil sands to have a viable commercial future, there has to be a very significant and sustained recovery in oil prices.

But a return to anywhere close to the triple-digit prices that spurred the development of the oil sands, as well as shale and other high-cost supply sources, seems less and less likely in a world increasingly governed by international commitments to reduce carbon emissions and limit the increase in average global temperature to well below 2 degrees Celsius.

Even under the International Energy Agency’s 450 scenario, now seen as a bare minimum in view of the recent emission commitments made at COP21, global oil consumption peaks by the end of this decade and falls by nearly 25 per cent to 74 million barrels a day over the next two decades. And those projections are tied to only a coin toss’s chance of holding average global temperature to a 2-degree rise. The higher bar for a target of 1.5 to less than 2 degrees, adopted last year in Paris, requires even deeper cutbacks in future global oil consumption.

Even if the oil sands incurred only a reduction in production proportional to the required shrinkage in global oil demand, it would imply shutting in more than 600,000 barrels a day of current output. But with costs anywhere from five to six times those of some OPEC producers, oil sands producers will be forced to shoulder a much larger share of the required cuts to world production that would follow in a steadily shrinking global market.

Far from needing new pipelines, the oil sands industry will soon have problems filling the capacity of existing ones in tomorrow’s emission-constrained world.