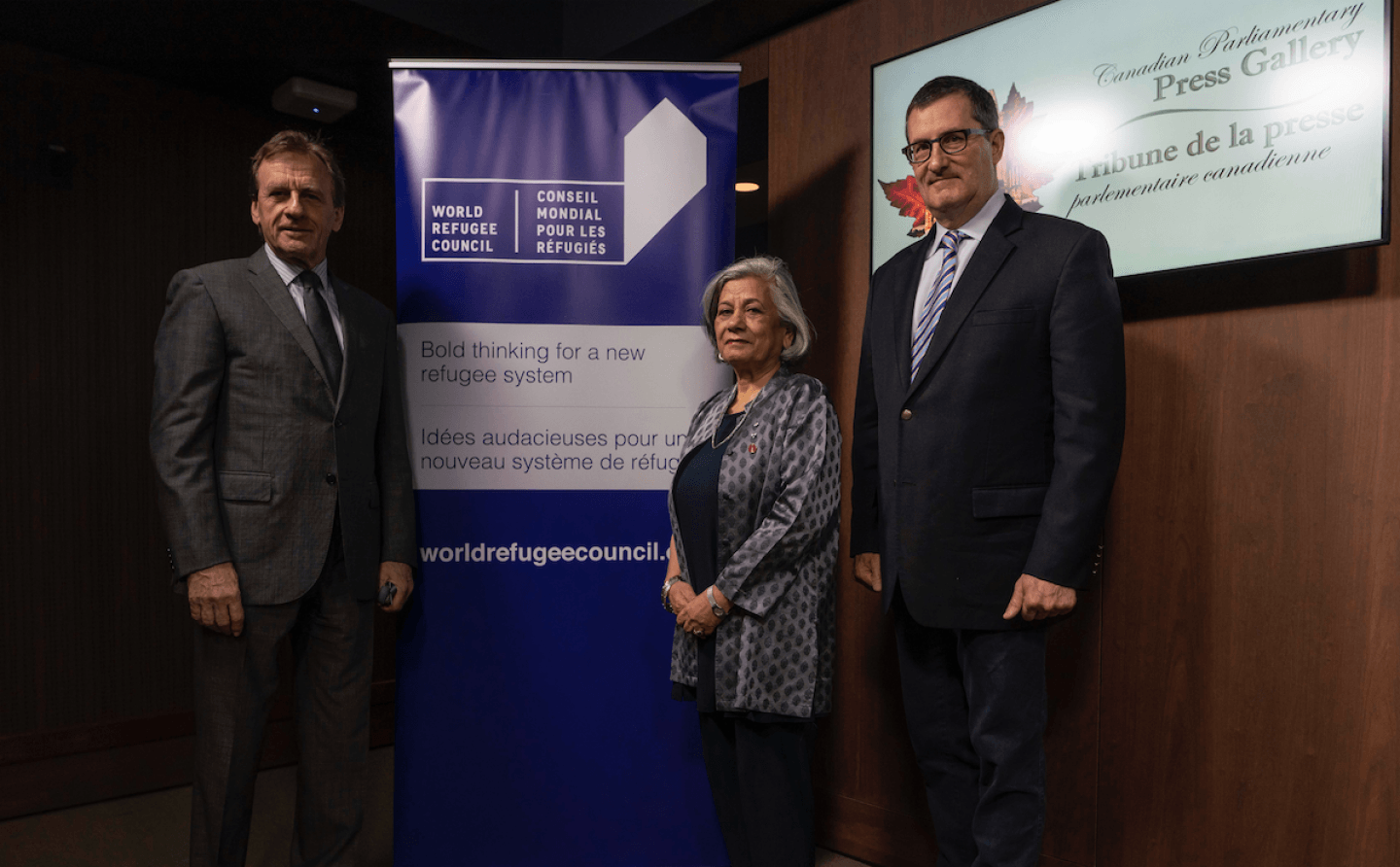 Former Canadian Justice Minister Allan Rock, Senator Ratna Omidvar and CIGI's Fen Osler Hampson — all members of the World Refugee Council — were on hand to announce a new bill that would allow the seized assets of corrupt foreign dictators to be repurposed to help refugees.

OTTAWA, March 21, 2019 — A new bill that would allow the Canadian government to confiscate and repurpose the seized assets of corrupt foreign leaders to help refugees and others who have suffered under their regimes was introduced in the Senate of Canada today.

Bill S-259, the Frozen Assets Repurposing Act, was tabled this afternoon by the Honourable Ratna Omidvar, a Senator from Ontario and a member of the World Refugee Council.

“This bill will make corrupt foreign leaders and dictators that perpetrate grave crimes against their people — including human rights abuses and mass forced displacement — pay for their crimes with their own ill-gotten gains,” said Senator Omidvar.

Under existing legislation, the federal government can freeze assets in Canada of foreign officials responsible for corruption or gross violations of human rights. However, Bill S-259 goes a step further by giving the government, in appropriate cases, the ability to use those assets to help refugees, internally displaced persons (IDPs) and others who have been harmed as a result of violent, oppressive or corrupt regimes.

“For example, Canada has already frozen the assets of military generals in Myanmar who have committed a genocide against the Rohingya and forced over a million people to flee to Bangladesh,” said Senator Omidvar. “Under this proposed legislation, Canada, through the courts, could confiscate those assets and repurpose them to help the people who are struggling in refugee camps in Bangladesh.”

Senator Omidvar’s proposal draws on the work of the World Refugee Council — an initiative of the Centre for International Governance Innovation (CIGI) — and its recent report, A Call to Action: Transforming the Global Refugee System. The report presents a series of concrete actions to protect the interests of refugees and IDPs, including innovative financing measures such as the one outlined in Bill S-259.

Should Bill S-259 pass, Canada would become the second nation to enact this type of legislation. As detailed in the Council’s report, Switzerland adopted the Foreign Illicit Assets Act in 2015, which allows the Swiss government to seek a court order to confiscate frozen assets and restore them to the country of origin for the purposes of providing humanitarian aid and strengthening the rule of law.

According to the UNHCR, nearly 70 million people worldwide have been forcibly displaced from their homes by conflict and persecution, the largest number since the Second World War. While many are refugees, more than two-thirds are IDPs. While IDPs experience the same hardships as those who seek safety by crossing a border, they lack the same legal status, protection and services afforded to refugees, and could especially benefit from the assistance proposed in Bill S-259.

VIDEO: Senator Omidvar talks about the concept behind the new bill

About the World Refugee Council

The World Refugee Council was formed in May 2017 by the Centre for International Governance Innovation with the support of the Government of Canada and other partners. Led by former Canadian Minister of Foreign Affairs Lloyd Axworthy, the Council is an independent, global body composed of nearly two dozen political leaders, policy advisers and academic experts, including a Nobel prize winner, a business leader, civil society actors and human rights activists from around the world. With its major report, A Call to Action: Transforming the Global Refugee System, the Council seeks to strengthen the global response beyond the United Nations and its global compacts on refugees and for migration. www.worldrefugeecouncil.org

About the Centre for International Governance Innovation (CIGI)

We are the Centre for International Governance Innovation: an independent, non-partisan think tank with an objective and uniquely global perspective. Our research, opinions and public voice make a difference in today’s world by bringing clarity and innovative thinking to global policy making. By working across disciplines and in partnership with the best peers and experts, we are the benchmark for influential research and trusted analysis. www.cigionline.org

For more information or to arrange an interview with a World Refugee Council member, please contact: