Put Climate at Heart of Business and Human Rights Work

What is the relationship between business, human rights and climate change? 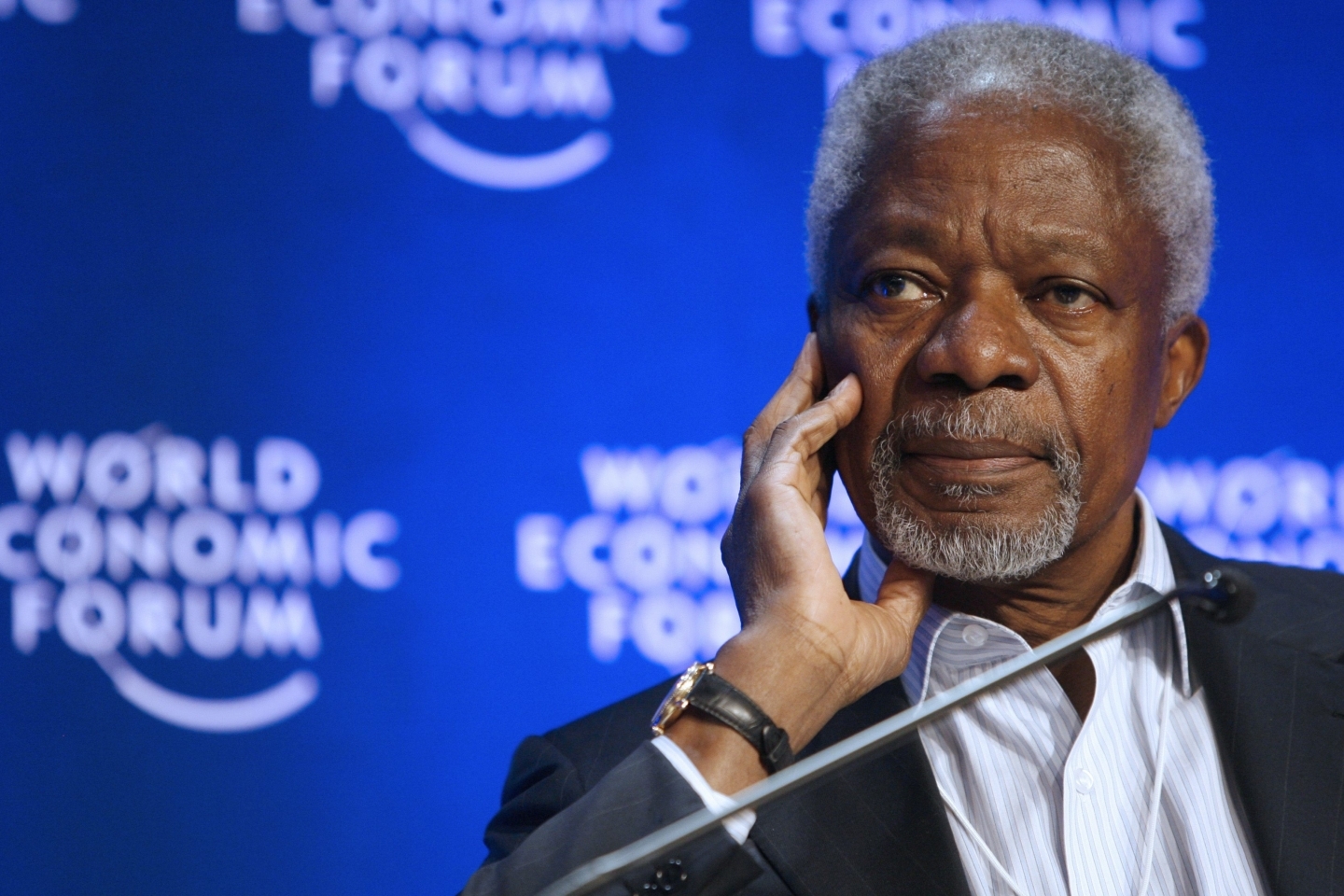 Kofi Annan, member of the Foundation Board of the World Economic Forum, in Davos, Switzerland (AP Photo/KEYSTONE/Alessandro Della Bella)

It was a prophetic warning that Kofi Annan issued in front of the World Economic Forum 18 years ago when he cautioned that globalization would be “vulnerable to backlash from all the ‘isms’ of our post-Cold War world: protectionism, populism, nationalism, ethnic chauvinism, fanaticism and terrorism.”

The then-secretary-general of the UN explained to the global elite gathered in the Swiss resort town of Davos that in order to inoculate themselves against this backlash, they would need to commit to sustainability.

Annan “appealed to the business community to step up and play its role in achieving a socially sustainable globalization,” recalled Professor John G. Ruggie, the former UN special representative on business and human rights, who recently delivered the keynote address at the fifth United Nations Forum on Business and Human Rights at the Palais des Nations in Geneva, Switzerland.

The work done to establish the UN Guiding Principles on Business and Human Rights, sometimes known as the Ruggie Principles, has been nothing short of remarkable.

But nearly two decades on from Annan’s address, as the global elite prepares to gather again in Davos at the end of January, it is past time the discourse on business and human rights evolved to take fuller account of the harm done by climate change.

The evolution in recent years of the dialogue on the link between business, human rights and climate change in forums like the UN Forum on Business and Human Rights has been telling. The UN forum is an important bellwether, in that it brings together more than 2,000 participants from around the world, representing governments, businesses, law firms, civil society organizations, financial institutions, indigenous peoples and academics.

Notably, climate change was emphatically put on the agenda of the UN forum in 2013 in a speech by Mary Robinson, currently the special envoy on El Niño and climate, as well as president of the Mary Robinson Foundation – Climate Justice.  Already in 2013, she highlighted the importance of linking business and human rights, climate change and development.

But the record since has been mixed. A side event on climate justice was on the agenda of the 2015 forum, with participants speaking to the urgent need to incorporate climate change into the business and human rights agenda.

At the 2016 forum, several panels touched upon climate-change themes, while others studiously ignored it.

To be clear, there were meaningful discussions. For example, a session focused on green energy and human rights raised the challenges confronting indigenous communities when green-energy projects are imposed on lands without seeking their consent. One participating green-energy company usefully highlighted that the issues facing companies with regard to indigenous peoples are the same as those confronting fossil fuel extractive companies – and, indeed, many green-energy companies were once fossil fuel companies that have, or are in the process of, transitioning.

But while the UN forum comfortably considered the importance of green energy and business and human rights with a focus on the rights of indigenous peoples, the importance of considering environmental-rights holders (who might claim procedural rights to information, impact assessment, participation and access to justice) more generally was missing. Yet this is a concern that rears its head around the world.

Another session, the first at a UN forum, considered the relationship between human rights and insurance, with attention to the UNEP Principles of Sustainable Insurance. This was an opportunity to clearly link climate change – an issue of utmost importance to the insurance industry – with human rights, yet the conversation seemed to assume these were separate issues rather than inextricably intertwined.

Concern at the 2016 UN Business and Human Rights Forum was with direct impacts on the rights of indigenous and local communities, including those arising from conflicts with public and private security forces protecting operations. Unspoken was the need for these extractive energy companies to grapple with the human rights implications of their business model in a time of climate change, an issue squarely on the table, as illustrated by the ongoing Philippine climate-change petition, yet left unspoken at the 2016 forum.

The concluding session of the 2016 forum provided a powerful opportunity to hear from Laura Zúniga Cáceres, the daughter of recently murdered Honduran environmental rights defender Berta Isabel Cáceres Flores. Increasing numbers of environmental human rights defenders have been killed in recent years, with more than 100 deaths in Latin American alone in 2015. As the case of Berta Cáceres reminds us, these defenders are often indigenous women, killed while defending Mother Earth against extractivism including hydroelectric projects that in a time of climate change are often seen as a green-energy solution. Yet women, especially indigenous women, are also among the most vulnerable to the effects of climate change.

Her case underlines the pressing need for the conversation about business and climate change to extend beyond an environmental management framing in which carbon offsets and emissions trading are acceptable.

As the World Economic Forum gathers again, there is a need to confront the human rights implications of the failure to aggressively transition to clean energy in a rights-respecting way.

Climate-change harms – both direct and indirect – must be understood as salient risks for business.

What is the relationship between human rights and climate change, and, more specifically, business and human rights, and climate change?
The opinions expressed in this article/multimedia are those of the author(s) and do not necessarily reflect the views of CIGI or its Board of Directors.